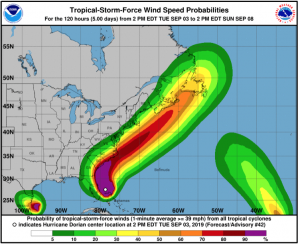 Forecasters from the National Weather Service in Wilmington warned that the forecast track was subject to change, with even a small wobble to the west having the potential to bring more severe impacts from the storm that has killed in Bermuda and remained a powerful and potentially deadly force as it made a slow turn towards the Carolinas on Tuesday.

Impacts from Dorian are expected to begin Wednesday night into Thursday morning, the 6 p.m. NWS briefing said. Inland areas can expect flooding rain of up to 10 inches, tropical storm force winds and a possibility of isolated tornadoes. 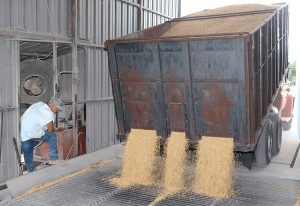 Disaster declarations in both Carolinas freed farmers and others to ignore ordinary weight restrictions and other regulations in order to get crops from the fields ahead of the storm.

At the House of Raeford grain bins in Tabor City traffic was brisk, with hours extended.

Some farmers were bringing in their last truckloads at 5 p.m. Tuesday, others had a long way to go.

“I’ve got 100 acres left,” one farmer said, eager to get back to the fields as he waited his turn to unload.

Farmers reported a mixed quality of crops for the season, with those in southeastern areas of the county and some near Tabor City saying the year had been kind, with enough rain even though overall the season had been dry.

Others said the season was a tough one, with some fields showing a wide variety of yields just from one side to the other.

Local governments in Horry and Columbus counties were finishing up storm preparation activities and preparing to await Dorian’s arrival. 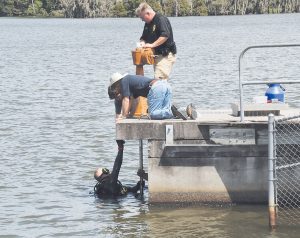 Work was underway at the Lake Tabor dam to drop the lake’s water level in advance of Hurricane Dorian. For more see tomorrow’s Tabor-Loris Tribune in print and online. (Deuce Niven, TLT)

In Tabor City engineer John Grimes and a dive team from In Water Services in Greensboro were at the Lake Tabor Dam, assessing its condition as repairs from Hurricane Florence await, and taking steps to reduce the water level in the lake.

“We’re going to drop it by four feet, but I don’t know that that will happen before Thursday,” Grimes said. “We’ll drop it by two or three feet.”

Shelters in Columbus County open at 8 a.m. Wednesday (see the update below), and have been open since Monday afternoon in Horry County, where mandatory evacuations of the immediate coast began at noon Monday.

Public schools and colleges in Horry County were closed effective today, an extension of the Labor Day break, with the timeline for reopening unknown.

Public schools in Columbus County were open Tuesday, and will be closed effective Tuesday through the end of the week at least.

Classes at Southeastern Community College will be suspended effective at noon Wednesday, with reopening to be announced after the hurricane has passed.

Columbus County government is operating in a state of emergency effective at 8:30 a.m. today, the latest in a series of counties on or near the Carolinas coasts to make that declaration.

Other shelters will be opened at West Columbus and East Columbus high schools and Edgewood Elementary School in Whiteville.

Edgewood, at 317 East Calhoun Street, will be the only shelter to allow pets.

Those who need transportation to get to a shelter needs to call 910-642-7201 today (Wednesday) to request those arrangements, a county government news release said.

“Transportation will not be available once tropical storm winds (35 mph) arrive,” the news release said.

Those who seek refuge at any of the shelters will need to bring personal information including identification and insurance information, medications, bedding, clothing, stuffed animals or other items to occupy children.

No alcohol, illegal drugs or weapons are allowed at any shelter.

Horry County government offices will be open Wednesday, closed Thursday and Friday. Staffing Wednesday may be lighter than usual, and members of the public should call before going if they need to conduct business.

Myrtle Beach International Airport remains open, that schedule subject to change and those planning to fly should check with their airlines on flight status through the end of the weekend, at least.

Horry County Museum and Living History Farm activities have been cancelled for the rest of the week. 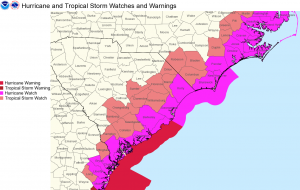 Teachers may report to school for an optional work day on Wednesday, Jones said.

In Tabor City Mayor Royce Harper has declared a state of emergency related to the approach of Hurricane Dorian to begin at noon Wednesday. There are currently no “restrictions or prohibitions” imposed under the declaration, it said.

A hurricane watch is in effect for Horry County, tropical storm watch in Columbus, as Hurricane Dorian began slow movement to the north Tuesday morning after stalling over Bermuda for a day.

Red Cross shelters opened in Horry County Monday, with only volunteer workers at the shelter at Loris High School Tuesday morning. Potential evacuees, one shelter volunteer said, are waiting to see when, and where, Dorian moves.

Election filings in Loris may be a casualty of Dorian, with the two-week filing period scheduled to end at noon Friday now shortened, ending at noon Wednesday, City Clerk/Treasurer Kenya Wright said.

City offices in Loris will close at noon Wednesday, Wright said, and city workers have been working since Monday to make sure storm preparations are complete for whatever Dorian brings.

Loris City Council, scheduled to meet tonight, will not because of the storm preparation. A “Breakfast with the Mayor” program planned for Thursday has also been cancelled.

Columbus County offices will be closed Wednesday and Thursday, with a decision on Friday to be made later, Administrative Assistant Gail Edwards said.

Tabor City offices will be open through noon Wednesday, its regular schedule, and will be closed Thursday with future decisions likely to mirror Columbus County’s schedule, Thompson said.

Courts in Columbus County will operate normally Wednesday, and be closed Thursday and Friday, Clerk of Court Jess Hill said.

Horry County Schools closed today, students getting an extended Labor Day break, with decisions on when to re-open to come after Dorian has passed.

Sand for sandbags is available for Loris residents, the free give away starting at noon today, Wright said.

Sand is located behind the T-Ball field at the Loris Recreation Department, 311 Heritage Road. Residents only must bring their own bags, with a limit of ten bags per household.

City personnel will not be available to fill or deliver bags. The supply is limited, Wright said.

Hurricane Dorian continued to keep forecasters uncertain throughout Monday, nearly stalled near the Bahamas and beginning to inch its way towards the Carolinas.

Traffic heading away from the coast was heavy in Tabor City Monday. (Jenn Causey, TLT)

Public schools and two colleges in Horry County won’t return to classes today, while in Columbus County schools and Southeastern Community College will operate on a normal schedule Tuesday, decisions on later in the week not yet announced.

County government offices in both Columbus and Horry counties will be open Tuesday.

Courts will also be open in Columbus County, Clerk of Court Jess Hill said, with decisions for later in the week pending.

Municipal offices will be open in Loris and Tabor City on Tuesday, decisions pending for later in the week.

Loris City Council’s meeting scheduled for Tuesday night has been cancelled, and “will be rescheduled as soon as possible,” Clerk/Treasurer Kenya Wright said in a holiday e-mail. “At this time we feel it is most important for our citizens to prepare for the upcoming weather. Safety and preparations are the priority.”

Forecasters were in general agreement that impacts from Dorian in the Tabor-Loris Community would come Wednesday, though the timing was less clear as the hurricane crawled towards the Florida cost.

Dorian was expected to remain off the coast of Florida and Georgia, and likely the Carolinas though forecasters warned that even a slight “jog” to the west would have significant impacts, a jog to the east hoped for but far from certain.

Landfall and a more westerly track remained in the cone of uncertainty through all of South Carolina and beyond North Carolina’s Cape Fear, a worst case scenario especially for communities still recovering Hurricane Matthew in 2016, Hurricane Florence just less than a year ago.

What days ago appeared to be a looming disaster for Florida has become a real and growing threat to the Carolinas, with Hurricane Dorian Sunday wreaking havoc on the Bahamas and forecasts forcing early evacuation orders as far north as Horry County, with school closings to extend the Labor Day holiday already ordered in Horry.

“Once the evacuation order has been lifted and re-entry has been completed, school officials will inspect all school facilities to ensure that building utilities are fully operational and all hazards have been removed before schools are re-opened.”

College officials said students will be given ample notice before classes resume.

A state of emergency in Columbus County allowed farmers and others to exceed highway weight limits and other restrictions to bring crops in and prepare for the impending storm.

School officials in Columbus County had made no announcements as of Sunday evening, with those schools also closed Monday for Labor Day.

Gov. Henry McMaster has ordered evacuations along the immediate coast of South Carolina beginning at noon Monday, including Zone A in Horry, everything east of US 17 Business along the Grand Strand.

Horry County government moved its state of readiness to OPCON 2 Sunday morning, meaning a “heightened state of awareness with emergency plans beginning to be implemented,” a county news release said.

States of Emergency have been ordered from Florida through the Carolinas, with most forecast models Sunday anticipating the monster Hurricane, now a Category 5, off Grand Strand coast Thursday afternoon, then moving more quickly to the north and off the southern Virginia coast by Friday afternoon.

Though the storm is expected to weaken, wobbles at the core could bring tropical storm force winds, or higher, to the region. Emergency officials urged vigilance and preparation.

Area stores reported brisk business during the weekend with people stocking up on supplies, some buying generators.