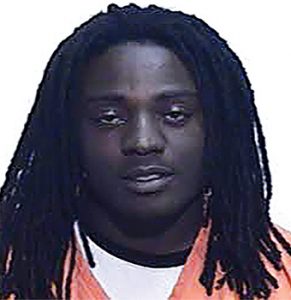 A Whiteville man wanted for questioning in a weekend triple murder near Whiteville has been identified by the Columbus County Sheriff’s Office.

Cherry is considered armed and dangerous.

“If you were to encounter this individual, please don’t approach him, instead call 911 immediately,” the news release said.

Sheriff Greene also reminds the public “that it is important to pay attention to what is going on around you and to call 911 if you see anything suspicious. Any information given will remain anonymous.”

Investigators have been working “around the clock” following the shooting deaths of a 5-year-old boy and his parents Saturday morning, Greene said previously.

Leonel Ciprian Noyola; 29, his wife Nancy Trujillo Espinoza, 25; and their son, Alexis Alexander Ciprian Noyola, 5, died at their home off of NC 130 south of Whiteville.

Rafaela Noyola Jaramillo, 51, survived being shot. Her husband was working out of town at the time of the shootings.

Cherry has outstanding warrants charging him with possession of a stolen firearm, possession with intent to sell and deliver cocaine, maintaining a dwelling for the purpose of keeping and selling cocaine, and resisting a public officer.

While anyone who sees Cherry is asked to call 911, those with other information pertinent to the murders can call the sheriff’s Criminal Investigation Division at 910-640-6629, contact the Columbus County Sheriff’s Office by Facebook messenger, or use the “Submit a Tip” link at the bottom of the page here.