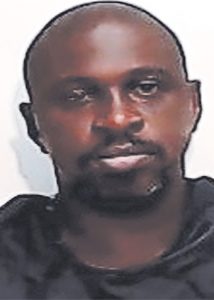 A Tabor City area man has been charged with murder in the of a man’s body who was found shot dead in his car in the Pireway area Monday.

Lakeithy Gene Keller, 44, of Horace Cox Road, Tabor City, was charged Thursday night with murder, assault with a deadly weapon, and communicating threats in the killing of Mitchell Smith, 34, of Whiteville.

Bond was denied for Keller during a first appearance hearing before District Court Judge Fred Gore in Whiteville. Keller’s next court appearance is scheduled for Oct. 1.

Smith’s body was found in the back seat of his vehicle off of the roadway in the 14000 block of Swamp Fox Hwy East Monday night. Witnesses said Smith had an apparent gunshot wound to the chest.

Keller’s home address is a little more than ten miles from where Smith’s body was found.

Keller has an extensive criminal history, North Carolina Department of Public Safety records show, his first conviction in December 1991 just two weeks after his arrest on breaking and entering and larceny. He was given a suspended sentence and probation on that arrest.

Months later he was charged with assault and damage to property in a March 1992 case, given another suspended sentence and probation on May 1 of that year.

An arrest for drunk driving and driving without a license sent Keller to prison for the first time in June 1992. Sentenced to a year in prison, Keller was released in less than two months.

He was convicted of speeding to elude arrest on Feb. 18, 2016, admitted to prison six days later. Sentenced to two years and five months in prison, he was released on June 2, 2017, after serving less than one year and four months.