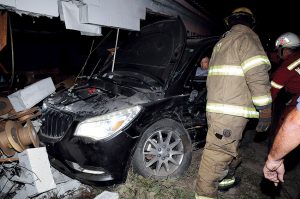 Williams Township firefighters work to free the driver of this Buick SUV that crashed through the block wall of an upholstery business that was not open Saturday night. (Deuce Niven, TLT)

Four people were taken to area hospitals after a two-vehicle crash sent one into an upholstery business in the Sidney Community Saturday night.

An AirLink helicopter took the driver of the Buick SUV that struck the block building to a regional trauma center after Williams Township Fire Department’s extrication team cut him from the vehicle. Tabor City Emergency Services rendered initial care and provided transport to a landing zone set up at South Columbus High School. 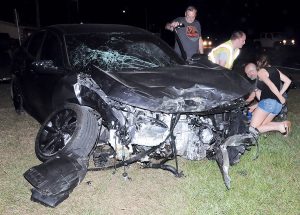 The driver and two passengers in a Honda Civic were taken by Nakina and Chadbourn ambulance crews to area hospitals. All of the patients were talking to first responders, and none of the injuries appeared life threatening.

At least three troopers from the North Carolina Highway Patrol responded to the crash on U.S. 701 at Peacock Road.