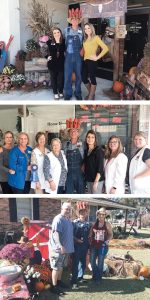 Don’t be a ’Tater Hater, with the North Carolina Yam Festival at Tabor City’s biggest day now just hours away.

Entertainment on two stages, a sweet potato pie eating contest, vendors for foods and crafts galore, and a re-imagined car show with “squatted vehicles” invited for display and the festivals Yam Parade all invited.

Festival veterans will notice a very different route for the parade, in reverse and altered, the move forced by the planned demolition of the old Tabor City High School which has been delayed.

Parade line-up will be north on Main Street from Two Broke Teachers, with the route to move south, past Dameron Drug and the Medicine Mart on the opposite ends of Main Street downtown. From there the parade will cross the tracks onto Hickman Road, go south to Bell Street, east to Pireway Road, then north up 5th Street back to Main and finishing where it began.

Parade entrants need to arrive early, the procession set for a 10 a.m. start.

Pie eating with gusto is the scheduled competition at 3:30 p.m. on the Ritz Plaza Stage.

Festival details may be found in the special section in this week’s Tabor-Loris Tribune in print and online.