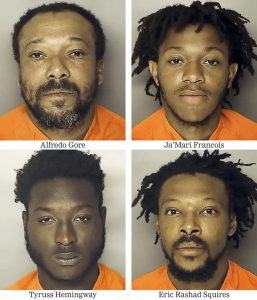 Heroin, cocaine, marijuana and a small cache of weapons were seized.

Horry County Police and the U.S. Marshals Carolinas Regional Fugitives Task Force were in the neighborhood to arrested a wanted person when they found guns and drugs in plain view, the news release from HCPD spokeswoman Mikayla Moskov said.

Those arrested and the charges against them were: 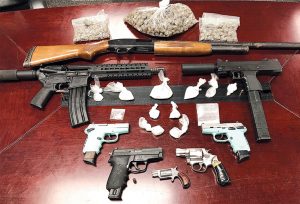 Three of the four men were jailed at the J. Reuben Long Detention Center near Loris without bond. Bail for Squires on the attempted murder charge was shown at $25,000.

Gore’s domestic violence charge was related to a Sept. 29 incident with a woman at his Cedar Branch Road home, an HCPD report said.

Squires’ attempted murder charge was related to a Sept. 18 incident that took place at a home on Hwy 746 near Loris where he was accused of firing shots during an argument with a man, a report said. Squire’s home is shown on Cedar Branch Road.