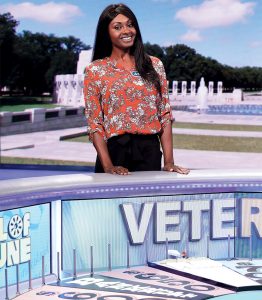 A Fair Bluff native is a winning contestant on Wheel of Fortune, the nationally syndicated TV staple.

Angela Evans won $19,800 while collecting the “Wild Card” in the game broadcast locally Thursday evening. She was among the Veterans Week contestants showcased ahead of Veteran’s Day on Monday.

Evans told host Pat Sajak that she was a seven-year veteran of the US Marine Corps, where she was an Imaging Intelligence Analyst working with drones.

A native of Fair Bluff, Evans spoke of her 95 year-old grandmother “we call Momma Cat” and her children, including adult daughters Hope and Faith, and adopted two-year-old twins Nonia and Sofina.

She also introduced her “not-hubby” Frank during the bonus round.

Her attitude won praise from Sajak.

“I love them all,” Evans responded.

In the bonus round Evans had only the E, A, and R, not enough as she was unable to decipher “You owe me a favor.” Her “Wild Card” letter pick, a G, was no help, but Evans was still laughing as Sajak revealed the $37,000 she did not win in the bonus round.