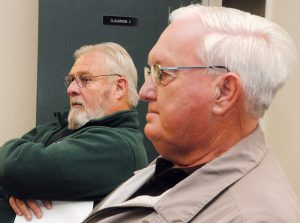 A recount in a razor close race for a second seat on Tabor City Council won’t take place until next Friday, that meeting of the Columbus County Board of Elections set for 10 a.m. in the elections offices in Whiteville.

Incumbent Nelson Lee, who lost his re-election bid to incumbent Ronnie Graham by a single vote, 164-163, was prepared at Friday’s board canvas to request  recount, one officials on Thursday had indicated might take place on Friday.

After consulting with officials at the State Board of Elections offices in Raleigh, Acting Elections Director Kathy Enzor said the recount would be held next week.

It will be Friday, she said, because she will be involved in state elections training Monday through Thursday of next week.

Lee also presented a letter to the board from voter Hank Prince, who said he witnessed a problem with the ballot counting machine at the Tabor City District Court Building on election day. Enzor initially said the problem was with a printer, not the ballot counter, but Prince’s written statement was clear that the ballot counter was involved.

After consulting with elections staff, Enzor reported that the error with the ballot counter was reported on election day, but not properly documented. Although the machine jammed as one ballot was put through it, the vote was properly recorded, Enzor said.

A recount, both the candidates and board member said, should clear up any issues involving the election day count.

Lee and Graham both said they though the recount would take place immediately, and that they both were present for that process.

“I’m going to give you my request for a recount,” Lee said as he presented the document to Board of Elections chair Bonita Blakney, “so Ronnie and I can get on with our lives.”

With the canvas Friday results for Tabor City Mayor and the first of two open seats on council were formally approved. Incumbent Mayor Royce Harper and incumbent Councilman David Mincey were clear winners in their respective ratings.