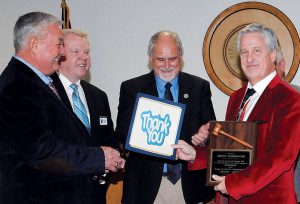 Some competitive races for Columbus County Commissioner are shaping up early, with an early filing season beginning Monday, ending at noon Friday, Dec. 20.

Commissioner Trent Burroughs of Tabor City, a Democrat holding the District 5 seat and seeking a third four-year term on the county board, will face a challenge from Republican Brent Watts of Clarendon, both men filing Monday.

Democrat and incumbent James Prevatte will face a challenge from Republican Mack Ward for the District 2 seat. Prevatte filed Monday, Ward on Tuesday.

Incumbent and newly elected board chair Edwin Russ has announced his intent to seek re-election, but had not filed for the District 4 seat by Tuesday afternoon. Russ changed his party affiliation from Democrat to the GOP earlier this year. Democrat Frank Galloway, however, filed to seek the seat on Monday.

Democrat and incumbent Giles E. (Buddy) Byrd filed for re-election Monday, and had not been challenged by Tuesday afternoon.

Look for more on election filings in Wednesday’s Tabor-Loris Tribune in print and online.