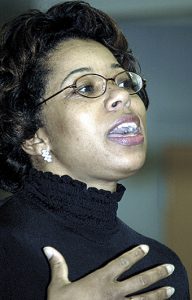 Judge Lewis will lie in repose from noon to 7 p.m. Friday, Jan. 3, with funeral services from 2 to 4 p.m. Saturday, Jan. 4, in the Odell Williamson Auditorium at Brunswick Community College.

Resident Superior Court Judge Ola M. Lewis, who began her career on the bench in Columbus County, died Sunday after battling a rare form of liver cancer for two years.

Judge Lewis passed away at her home, surrounded by family.

Rabon said his announcement came “with a heavy heart.

“Judge Lewis has served as senior resident superior court judge since 2003 for Judicial District 13A and 13B, covering Bladen, Brunswick and Columbus counties. She was first appointed a judge in 1993, prior to which she was an assistant district attorney.

“At the time of her passing, she was the longest serving woman on the bench in NC. She received her undergraduate degree from Fayetteville State University and her Juris Doctorate from NC Central University.

“Judge Lewis was a bold and dynamic individual both on and off the bench. She worked tirelessly and was an advocate for those suffering from addiction and mental health disorders. She was a trail blazer – establishing and facilitated the Drug Treatment and Mental Health court in her district as well as the Brunswick County Opioid Addiction Task Force. Her compassionate efforts and steadfast belief in rehabilitation have helped hundreds of individuals turn their lives around by offering them second chances through hard work and accountability.

“The specialty courts established by judge Lewis have served as models across the state and nation. For her service to NC, Gov. Cooper bestowed upon her the order of the Long Leaf Pine.

“Judge Lewis will be sorely missed by those who had the privilege of knowing her and by those she touched while serving on the bench. Her friends and colleagues will miss her warm smile. Judge Lewis was loved by thousands of people and respected by everyone.”

See more on this story in this week’s  Tabor-Loris Tribune, online and in newstands Tuesday, due to the New Year’s holiday.