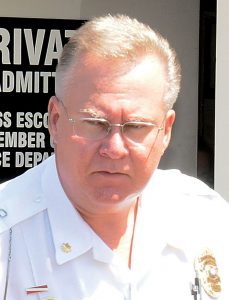 A former high-ranking Tabor City Police Department officer has been arrested on a stalking warrant obtained by the department he once served.

Gregory Ray Sibbett, 50, is accused in the warrant obtained by Maj. Russell Conway of stalking, allegedly placing a GPS tracking device on a pick-up truck owned by another TCPD officer, the warrant and incident report show.

Sibbett surrendered at the Columbus County Sheriff’s Office Wednesday, where the warrant was served and Sibbett released under a $2,500 unsecured bond, jail records show.

“My lawyers have told me not to make any kind of response at all,” Sibbett said.

Sibbett, then the major and second in command at the TCPD, resigned last October, saying he was pursuing opportunities in the private sector.

Officer Andrew Pait responded to Lewis’ home on Jan. 2, and was told by Lewis that he had discovered the GPS tracking unit on his truck, “near the spare tire towards the rear of the vehicle,” the officer’s incident report said. “Mr. Lewis also stated that he has text messages from Mr. Sibbett stating that he was going to place GPS unites on his vehicle.”

Lewis’ wife, Alisha Spencer, told police that Sibbett told her he would place the tracking device on Lewis’ vehicle, the report said.