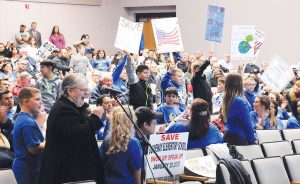 Passionate pleas to preserve Guideway Elementary School, challenges to a school consolidation proposal before the Columbus County Board of Education, and some alternative ideas were heard by some 500 people attending the second of three public hearings on the topic Tuesday, this one at South Columbus High School.

About 22 speakers addressed the school board and administration, many expressing their appreciation for the opportunity to speak on the plan to close four schools across the county, including Guideway, presented to the school board by Supt. Dr. Deanne Meadows on Dec. 18, 2019.

A hearing held Monday at West Columbus High was sparsely attended, with the last of the three scheduled hearings set for 6:30 p.m. Thursday at East Columbus High.

A decision on the proposal could come from the school board as early as Monday.

While adults on both sides debated the potential costs savings from the plan, estimated at $2.4 million per year by the superintendent; challenged the board to cut their own pay; and said school leaders had grossly overestimated costs associated with the school at Guideway; fourth grader Addy Ward made a plea to save the school for her and for her younger brother.

“Is it fair that we have to pay the consequences for decisions we can’t control,” Ward said.

Look for more on this story in tomorrow’s Tabor-Loris Tribune in print and online.