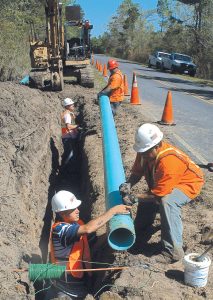 “It’s a good deal for Tabor City,” Leonard said. “Any time you can get $2 million for your infrastructure it’s a good day.”

“Working with the town and ensuring that the available funds are being allocated appropriately is something I am happy to have played a small role in,” said Jones, a Republican from Tabor City who represents portions of Columbus and Robeson counties. “It remains a top priority of mine that Tabor City and all of Columbus County continues to be considered for grants that can improve the lives of our citizens.”

Replacing aging sewer lines is part of an ongoing effort to improve the town’s entire wastewater system, including projects at the wastewater treatment plant. Look for more on that effort in today’s Tabor-Loris Tribune, in print and online.

This grant comes from CDBG funds awarded to the state in 2019. Look for more on this grant award and its impact in next week’s Tabor-Loris Tribune, in print and online.