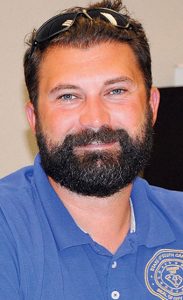 After nearly two years leading recreation programs for the City of Loris, Tom Cocke will be moving on soon taking a leadership position at the University of Virginia.

Cocke told Loris City Council of his decision Tuesday, and released a resignation letter to the community.

“I want to take a moment to let our recreation community here in the city of Loris know that I have been offered, and accepted, a position with the University of Virginia’s Intramural & Recreation Sports Department,” Cocke said in the letter. “It was a decision that I did not make in haste; it was actually one that was very emotional for me.”

Council member Jan Vescovi, who chairs the recreation committee, said UVA’s gain will be a loss for the city.

“Tom has been an unbelievable asset to the city and community,” Vescovi said. “When he accepted the position at Loris, he listened to the vision I had to offer a sports tourism program and made it a reality.

“He’s led our recreation department with honesty and integrity, and under his leadership we’ve seen growth in numbers and a stronger program. But most importantly, he built positive relationships with the youth and the community. I truly hate to see him go, but I wish him the best in his future endeavors.”

In his letter, Cocke said he was grateful for current and former city council members and city staff “for the opportunity and continued support given to me to try new things.

“The support from the community has also been amazing and many of the programs offered since I got here never would’ve happened or would have been as successful without that support.”

Look for more on this story in today’s Tabor-Loris Tribune in print and online.