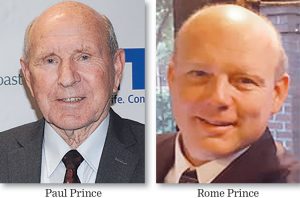 Council’s senior member, who has served more than ten terms, said he came to his decision “after much thought.”

Paul Prince made a soft announcement to some reporters Tuesday, and said his decision, at least in part, was to step aside so his son could run for the seat with his full endorsement.

“Rome grew-up around politics and can easily step into this role,” Paul Prince said.

Rome Prince is a former educator/coach at Georgetown County School District. He recently moved back to Loris with his wife, Jennifer, and family, and owns Serge Real Estate Group.

A formal announcement is planned during groundbreaking for the new Longs Fire Station at 2 p.m. this Friday.

Look for more on this story in this week’s Tabor-Loris Tribune, in print and online now.