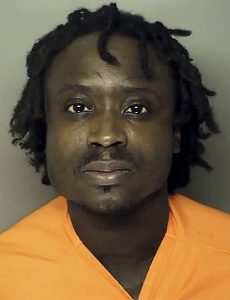 Nearly two years after gunfire in Loris that claimed a local man, a suspect in that slaying is in custody in Horry County.

Tyshawn Antwan Brown, 26, of Loris was booked at the J. Reuben Long Detention Center near Conway Saturday, charged with murder, attempted murder, possession of a weapon during a violent crime, and possession of an unlawful weapon, jail records show.

Those records indicate Brown was brought to jail by an extradition company. It was not clear where he was caught.

Durant’s parents, Charles and Wiletria Durant, made a plea more than a year later, last May, that Brown surrender himself to face justice.

“It’s been rough,’ Charles Durant said last May. “Hard to explain losing a life over something stupid. When you pull a trigger, you can’t take that bullet back.

“I want justice served. I believe in an eye-for-an-eye and a tooth-for-a-tooth. Be a man and turn yourself in.”

Two people were shot during the 2018 confrontation, the junior Durant and his girlfriend, Winter Parker.

When police responded after the 9:41 p.m. shooting, Durante was dead. Parker was rushed to the trauma center at Grand Strand Regional Medical Center in Myrtle Beach. She survived but had man surgeries to address her injuries.

A second man is also charged with Durant’s murder.

Heath Cherife Reaves Jr. of Loris was arrested by US Marshals in Philadelphia about a month after the shooting. He was later returned to Horry County and was charged with murder and attempted murder.

Trial for Reaves is pending.