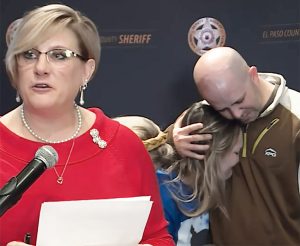 Letecia Leann Stauch, 36, was arrested in Horry County about 8 a.m. Monday, with officers from the Myrtle Beach and Horry County police departments accompanied by El Paso County investigators and agents of the FBI, Sheriff Elder said.

Stauch was charged with murder in the first degree of a child younger than 12 by a person in a position of trust, child abuse resulting in death, tampering with a body, and tampering with evidence, Both Sheriff Elder and District Attorney Dan May said.

Gannon’s father and mother were present for the news conference, Al Stauch and Landon Hiott collapsing and embracing at times during the emotional 20-minute news conference, live-streamed by multiple news outlets including Colorado’s KRDO TV.

Hiott has strong family ties in the Loris area that include her mother.

Hiott spoke, calling her son “…not only my hero, he’s the world’s hero.”

Hiott said she and her family received both the worst news and the best news earlier Monday, the worst obvious. 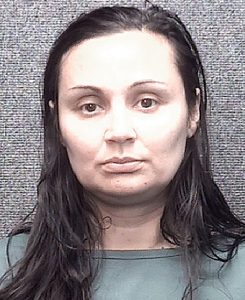 In a prepared statement read for him, Al Stauch described the heart-stopping moment his son was born, prematurely, at one pounds, six ounces, and the “infectious smile and constant laughter” he would later display.

Gannon Stauch, his father said, is now in the hands of God.

“How can I question God for bringing Gannon home to him,” Al Stauch said.

Prosecutors and investigators were in Horry County Monday, and will remain for some time doing crime scene work and going through the extradition process, Assistant District Attorney Michael Allen said.

Letecia Stauch will be held at the J. Reuben Long Detention Center near Conway until she is returned to Colorado, Allen said.

Look for more on this story as events warrant, and more details in this week’s Tabor-Loris Tribune in print and online.