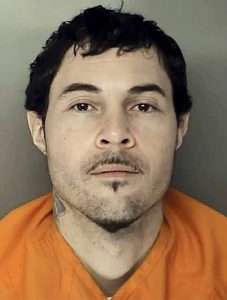 A suspect in a January shooting that left a pregnant woman “gravely injured” on a Green Sea area roadway is in custody in Horry County, charged with attempted murder in a domestic violence case, the Horry County Police Department revealed Monday.

Dustin Anthony Butler, 34, of Forestbrook Road in Myrtle Beach, has been in custody in North Carolina since soon after the Jan. 13 crime, an HCPD news release said.

Taken into custody by the Laurinburg Police Department just hours after the shooting, Butler was extradited to South Carolina last week and formally charged on March 25.

Butler was charged with attempted murder, first degree domestic violence, possession of a weapon during a violent crime, and possession of a firearm by a person convicted of a violent felony.  He remains at the J. Reuben Long Detention Center near Conway without bond.

Horry County Fire-Rescue crews were called to Bay View Drive and Mt. Olive Church Road shortly after 2 p.m. on Jan. 13 and found a 20-year-old woman lying in the road, an HCPD report said.

Though it initially appeared the woman had been run over by a vehicle, Fire Rescue personnel discovered a gunshot wound as they treated her.

The woman, who was pregnant, had been shot in the head.

Recently released from a hospital, the victim is doing well, her unborn child “unaffected by the incident and the child is expected to arrive later this year,” the news release said.

“The victim wishes to urge anyone suffering from domestic abuse to contact local authorities—there is help available,” the news release said. “Victim advocate services are available through Horry County Police Department, as well as other local law enforcement agencies.