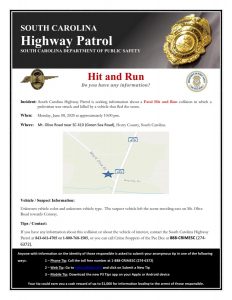 So far Troopers with the South Carolina Highway Patrol have little to go on in the death of a pedestrian, stuck and killed by a motorist west of Loris Monday night, and they are asking for help from the public, with a reward is being offered in the case.

That time frame is approximate, and based on the first 9-1-1 call on the incident being received at 9:45 p.m., Willard said. There apparently were no witnesses.

Hamilton had lived in several locations in the Loris area, most recently not far from where he was killed, Willard said.

Troopers, including members of the patrol’s M.A.I.T. (Multi-disciplinary Accident Investigation Team) unit are working to identify a suspect vehicle or a vehicle of interest, and the driver involved, Cpl. Sonny Collins of the South Carolina Highway Patrol said.

Submit a tip online here, or download the P3 Tips app on an Apple or Android device.

A cash reward of up to $1,000 is being offered for information leading to the arrest of those responsible, an SCHP flyer said.

Look for updates on this story here and in the Tabor-Loris Tribune in print and online as details become available.