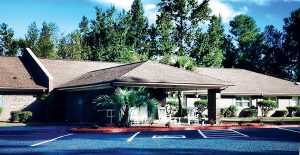 It’s been more than a month since the last COVID case at the facility was reported, in late May. For residents, their families, and staff at Tabor Commons, that marked a welcome relief to a grueling two months that began in late April, when what initially appeared to be a small outbreak exploded as every resident and staff member was tested.

Thirty-eight residents tested positive in that first round of testing, including the few initially sick. Two staff members also carried the coronavirus, though neither had shown symptoms, Ware said at the time. Before the outbreak ended, a total of five staff members would be infected.

There was a steady climb in the case count, and by May 8, two residents had died, the first of ten the disease would claim. A total of 52 residents would test positive for COVID-19 during the outbreak.

“These have been very trying times,” Ware said. “Very stressful working situations for the staff, so much to do, so much extra to be done.

“It’s been hard for everyone. We’re just thankful that everybody now is health, and we hope it stays that way. We know the pandemic isn’t over.”

Meanwhile, across the border at Loris Rehab and Nursing Center the COVID-19 outbreak has not ended, but its pace has slowed dramatically in recent weeks.

A single newly infected resident there reported by South Carolina’s Department of Health and Environmental Control on July 3 brought its pandemic total to 57 residents and 26 staff members, with 12 residents who have died, the most recent reported June 23.

Another 130 cases in Horry

With the new cases the county has recorded 4,845 COVID infections during the pandemic, with 52 residents claimed by the disease.

Statewide South Carolina has recorded 47,214 COVID confirmed cases since the pandemic began, an increase of 934 from Monday, with 838 people across the state who have died of the disease, 19 more than Monday.

A total of 1,324 Palmetto State residents were reported hospitalized for coronavirus complications Tuesday, 64 more than the day before.

That brings to 570 the total DHHS is showing, though its data may not show some positive tests that have been re-assigned to other locations after investigations revealed some tested were not residents of the county.

Zip Code data showed two of the newly confirmed cases in the Tabor City area, three in the Bolton area.

Statewide: North Carolina’s pandemic total of COVID cases reached 75,875 Monday, up by 1,346 from Monday, with 1,420 people claimed by the virus, that up by 22 from the day before.

DHHS data showed 989 of the state’s residents currently hospitalized with the coronavirus, 7 more than Monday.