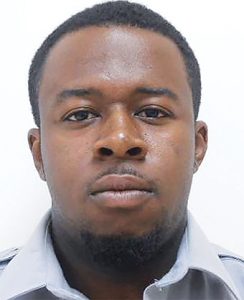 Felony cocaine and marijuana possession inside a prison charges were served against a Tabor Correctional Institution Officer just minutes after formally resigning his post Monday.

Transported to the Columbus County Detention Center in Whiteville, McBryde was charged and freed under a $25,000 unsecured bond. He was given a Sept. 21 court date in Hallsboro.

Police seized 10.5 grams of cocaine and 68.5 grams of marijuana that had been taken into the prison inside a lunchbox, getting past a security checkpoint at the guard house, the report said.

Supervisors inside the prison detected “the odor of marijuana” during a shift line-up just after McBryde reported for his shift, the report said.

“When the staff was questioned about the odor of marijuana the officer produced the package from his lunch box,” the report said.

Prison staff also retrieved “a set of patches which have not been identified,” the report said. Charges related to those patches will be determined by laboratory tests, Det. Christopher Hilburn said Tuesday.