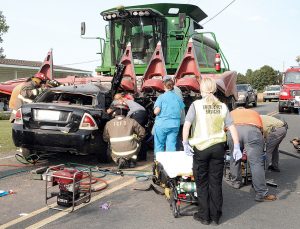 Two occupants of a Ford Fusion that slammed into a combine on Cox Town Road near Tabor City Tuesday were airlifted to a Myrtle Beach hospital.

New Hanover Regional AirLink helicopters based in Whiteville and Brunswick County landed adjacent to a recently cut corn field in the back yard of a nearby home following the 4:30 p.m. crash, and lifted off just minutes apart, both headed for the trauma center at Grand Strand Regional Medical Center, Chief Jeff Fowler of the Tabor City Fire Department said.

Rusty Powell, operating the unloaded combine, said he was on the way to some nearby corn fields when the fusion rounded a curve, and the driver tried to quickly slow down.

“You can see the skid marks,” Powell said. “He locked the brakes up and couldn’t control it.”

Fowler said both occupants are local men. The driver was talking as he was taken from the car, the passenger was not, Fowler said. 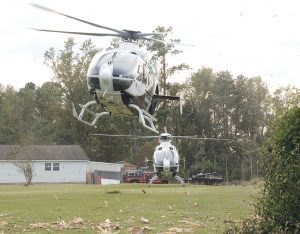 State Troopers from the North Carolina Highway Patrol were investigating. Tabor City Emergency Services and Nakina Fire Rescue ambulance crews provided care for the injured before handing them off to the AirLink crews.

Look for updates here as events warrant, and in the Tabor-Loris Tribune in print and online.