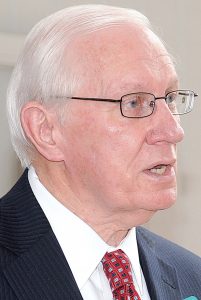 Robert Charles “R.C.” Soles Jr., who served 42 years in the North Carolina General Assembly before stepping away in 2010, has died. He was 86.

Soles died Friday at McLeod Loris hospital, an incomplete obituary posted by Inman Ward Funeral Home of Tabor City said. Soles had reportedly been taken by ambulance to the hospital earlier in the week from his longtime home on Canal Street in Tabor City.

Soles was elected to state office 21 times, first to the state House of Representatives, then to the state Senate, and became one of the state’s most powerful lawmakers in part because he understood better than most just how things worked in Raleigh.

Soles was a lifelong Democrat, his years in Raleigh came at a time when that party held political sway over much of the state, and in the general assembly.

Tabor City Town Manager Al Leonard said Soles was the key figure in many of the town’s successful economic development efforts, including securing one of six new state prisons, Tabor Correctional Institution, to the area during the 2000s. That facility opened in 2008.

He did not seek re-election in 2010, his service as a lawmaker ending at the end of that year.

Soles stepped away from his law practice in Tabor City last year. He had been in declining health for some time.

Funeral arrangements may be viewed here.

Look for more on this story and the obituary in the next Tabor-Loris Tribune in print and online.