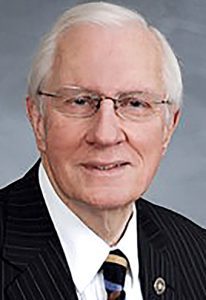 He attended Tabor City High School and graduated in 1952. He has been a lifelong resident of Tabor City and Columbus County, excepting only his college years.

Upon graduation he enrolled in Wake Forest University, and he graduated with a B.S. degree in Chemistry in 1956. Immediately upon graduation from Wake Forest he enlisted in the United States Army Reserve, where he served from 1957 until 1967, achieving the rank of Captain.

Following his enlistment he was admitted to Law School at the University of North Carolina at Chapel Hill, where he received his Law Degree in 1959. He was admitted to the North Carolina State Bar the same year and began the practice of law as a sole practitioner by returning to his hometown of Tabor City. He served as the attorney for the Town of Tabor City and for Columbus County, prior to beginning his legislative career.

Overall his legislative career extends an amazing 42 years, or 21 consecutive terms without ever losing a single election. He served as the Deputy President Pro Tempore of the Senate from 1993 until 1997. In addition he has served as the Senate Majority Chairman from 1997 until his retirement in 2011.

In the past he has chaired the Committee on Local Government, the Committee on State Government, the Judiciary Committee, and the Chair of the Senate Commerce and Vice-Chair of Judiciary I and Appropriations on the Department of Transportation. In his 38th session of the Legislature he was honored by being declared an ”Institution” as he is, was and most likely will be the longest consecutive elected legislator in North Carolina’s Legislative History.

He was the Founding President of the Southeastern Community College Foundation and served as a Former Trustee of the Consolidated University of North Carolina and UNC-Wilmington. He was a lifetime member of the Tabor City Baptist Church.

He was been active in economic development activities in Southeastern North Carolina and currently is a Director in LandBank, a development related company in the Myrtle Beach, South Carolina area.

R. C. handled almost every type of legal case, but he is best known as an advocate for the poor, the down-trodden and the oppressed. The late Everett L. Henry once said of R. C. “… imagine how much money he could have made, if only he had learned to say ‘No’”. He represented clients in civil and criminal matters in both State and Federal Courts. He was a true student of the Law and used his skills, which were honed and sharpened as a legislator, to represent his clients’ interests. He was probably best known for his personal injury practice and his knowledge of Insurance law. His dedication, work ethic, and ability to resolve complex problems and negotiate settlements were unmatched. He had a unique ability to be spontaneous, but he never spoke before he thought of what he intended to say. R. C. was one of the few remaining “Gentlemen Lawyers” who was always there to assist and advise young lawyers and never sought to take unfair advantage of his fellow practitioner.

With all the time he committed to the Legislature, his Law Firm, and the Community, R. C. never forgot one of his most important roles, that of caretaker. Despite his busy schedule he managed to assist with the care of his parents, Mr. Rob and Ms. Myrtle, who died at the ages 95 and 99 respectively, who had been married in excess of 75 years.