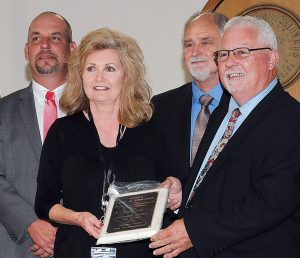 Gail Edwards, a veteran of Columbus County Government and current assistant to the county manager, was recognized for exempliary service during Monday’s board meeting. With her in this photo are, from left, commissioners Brent Watts, Charles McDowell, and chairman Ricky Bullard. (Deuce Niven, TLT)

County Manager presented the spending plan for the year beginning July 1 to commissioners Monday, recommending no change in the current tax rate of 80.5 cents for every $100 in taxable property while growing the budget with pay raises for employees and more.

Commissioners will hold a public hearing on the budget proposal at 6:30 p.m. Monday, June 7, in their chambers inside the Dempsey Herring Administration Building on Smith Street in Whiteville. Budget workshops will likely be scheduled for the board during that meeting.

Revaluation of county property, required at least every eight years under state law and completed earlier this year for Columbus, typically results in higher property values for many, often most properties across the county.

Revaluation this year increased the overall tax base by 17 percent, Madden told commissioners, from $3.196 billion to $3.742 billion.

A “revenue neutral” tax rate, what would have generated the same income in the next fiscal year as in this one, would be 69.9 cents for each $100 in taxable property, 10.6 cents lower than Madden’s proposal provides.

Commissioners presented Madden with a number of goals for the new budget year, objectives that can’t be met without increased revenue, Madden said after the meeting.

“Every penny that is cut from the tax rate means there is something that we can’t get done,” Madden said.

Impacts on individual property owners will vary, because the increase of 17 percent on property values is an average across the county. Some properties increased in value, some are worth less in the new tax year.

Real property owners were notified of the revaluation results earlier this year.

Madden proposed a new assistant county manager position in the new budget, and the promotion of his administrative assistant, Gail Edwards, to the post of Senior Advisor to the County Manager with a pay increase to reflect new duties.

Commissioners recognized Edwards early in the meeting for her work following the resignation of former County Manager Mike Stephens last fall, and during the transition as Madden took the post effective March 29.

“I tried to get her to be assistant county manager,” Madden said of Edwards, adding that she declined the post.

Madden said the position would be funded by “the combining of other positions and job duties within the organization.”

Madden would manage the Department of Administration, under the proposal, and be directly involved overseeing Finance, Airport, Economic Development, Health Social Service, and Tax Administration departments.

“By creating the two positions in the budget and by dividing responsivities, more assistance and oversight of the various departments will occur bringing about a more efficient and effective organization,” Madden said.