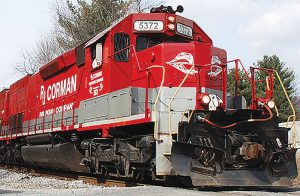 Twelve short line railroads and the North Carolina Ports Authority will be making improvements as a result of some $10.2 million in matching funds awarded through the FRRCSI, a NC Department of Transportation news release said Friday.

Track and crossings will be improved through the 50/50 matching grant, Bivins said, with the crossings component a small part of the overall project, totaling about $130,000, all in Columbus County.

Track improvements will include “joint elimination,” which involves welding sections of track of varying lengths together, allowing for faster, longer and heavier trains, Bivins said.

Replacing ties and resurfacing will also be part of the project, Bivins said.

Bivins said the improvements are part of an ongoing RJ Corman effort to improve the line that stretches from Chadbourn to Conway and to Mullins in Marion County.

Kentucky based RJ Corman purchased the line in 2015, its first tasks in restoring service after the previous owner was forced to abandoned tracks that failed to pass federal inspections.

Numerous projects, many fueled by federal grant funds, have been ongoing ever since.

With the grants the FRRCSI will contribute to nearly $20.8 million in infrastructure improvements across the state, the NC DOT reported.

The Freight Rail and Rail Crossing Safety Improvement Program was established in 2013 by the N.C. General Assembly.