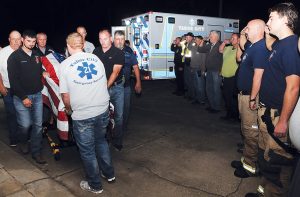 Jerry Hodges, a veteran firefighter with nearly four decades of service behind him before his retirement at the end of 2018, died Sunday at McLeod Loris hospital. He was 83.

An honor guard of TCFD members carried the body into the funeral home, as other personnel stood at attention, and at salute.

Rev. Tommy Bryson from Jones Street Baptist Church, Hodges’ home church, led the group singing “Amazing Grace” before offering a prayer. Men, women and children remained in the parking lot for some time, visiting with each other, and Hodges widow, Estalene.

Hodges served as chief for 19 years, about half of his firefighting career, all with the Tabor City Fire Department. He began service there as a volunteer, and over time moved up the ranks.

Hodges was appointed Interim Fire Chief on June 8, 1999, a day after Chief Jerry Watts resigned his post. By late July he had decided to seek the post full-time, and put in his application. He was hired as the full-time chief no Dec. 20, 1999, at the age of 60.

He had already served 19 years on the TCFD, and said then that he had aspired to long service, but that “I had no idea I would end up in the chief’s position.”

Jeff Fowler, who was appointed Assistant Chief the day Hodges was appointed Interim Chief, remained in that post until Hodges retirement, and became chief no Jan. 1, 2019.

Funeral services will be held at 2 p.m. Thursday, Oct. 13, at Inman Ward Funeral Home, with visitation from 6 to 8 p.m. the night before at the funeral home.

See the obituary here, and in Wednesday’s Tabor-Loris Tribune in print and online. A guest register is available here.