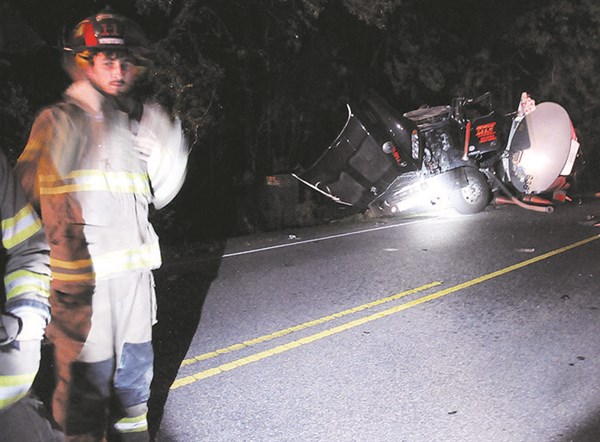 AFTERNOON UPDATE: With assistance from the Wilmington Regional Hazardous Materials Team and Tabor City based HERR, the gasoline tanker incident on NC 410 was resolved Thursday afternoon, and the highway reopened to traffic, Columbus County Deputy Emergency Services Director David Ransom said.
Residents of three nearby homes, evacuated early Thursday because of the explosive hazard, were allowed to return home about 3 p.m., Ransom said.

An overturned gasoline tanker has shut down a portion of NC 410 between Tabor City and Chadbourn.
Gasoline is trickling from at least one of the rooftop lids on the tanker, and from a small puncture near the rear of the tank, firefighters on the scene said.
Columbus County Deputy Emergency Services Director David Ransom said NC 410 would likely be closed for most of the day Thursday, from Carl Stephens to Williams Roads. Hazardous materials crews from Tabor City based HERR (Hazmat Emergency Response and Remediation) were on hand to clean up the spill.
It appeared that the Petroleum Transport Company, Inc. truck went off the side of the road leaving a “flat curve” while traveling south on NC 410 about 3 a.m., Roseland Fire Department Chief Len Fipps said.
The driver, with a Virginia license plate on his truck, was taken by ambulance to McLeod Loris hospital, Fipps said. His injuries did not appear life threatening.
“He was banged up, but he was talking,” Fipps said.
Tabor City and Williams Township fire departments and Chadbourn/Klondyke Fire-Rescue were assisting, Department of Transportation crews were providing sand in what was expected to be cautious, lengthy operation because of the explosive danger posed by the leaking gasoline, Fipps said.
Columbus County Schools’ transportation leaders were contacted, Fipps said, with the road closing expected to impact some school bus routes.
Check back for updates, as warranted, and get the full story in next week’s Tabor-Loris Tribune in print and online.