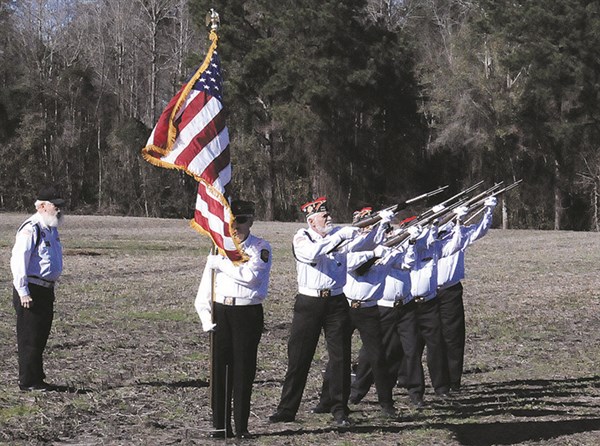 A rifle volley and the playing of “Taps” preceding ground breaking on the Veterans Memorial Park of Columbus County site on a bright, brisk Thursday morning.
“What’s happening right here can not happen all over the world,” project chaplain Michael Clemmons told more than 200 people gathered on clear ground south of Whiteville.
Organizers had worried about attendance, but were not surprised by the size of the crowd, Clemmons said.
“I think we got the word out,” Clemmons said.
Sgt. Major Kevin Whitaker, a U.S. Army recruiter who worked in Whiteville in 2000, was the keynote speaker.
“This is a very patriotic county,” Whitaker said. “I’m impressed, but not surprised by the turnout.
“You’ve just got so much patriotism going on down here in Columbus County, you live, breathe, and exude patriotism.”
Project President Randy Norris said support for the park, which will honor all military personnel, veterans and active duty, has been strong.
Columbus County Commissioners have already pledged $75,000, or about half the estimated project cost, and the group has raised more than $26,000. Buying the 8-acre tract adjacent to U.S. 701 south of Whiteville costs $65,000, the purchase concluded late last year.
Developing the park will take time, as fund raising efforts continue. A chicken bog and chili plate sale at the National Guard Armory, one of those fund raising efforts, followed the ground breaking.
For more on this story see next Wednesday’s Tabor-Loris Tribune in print and online.