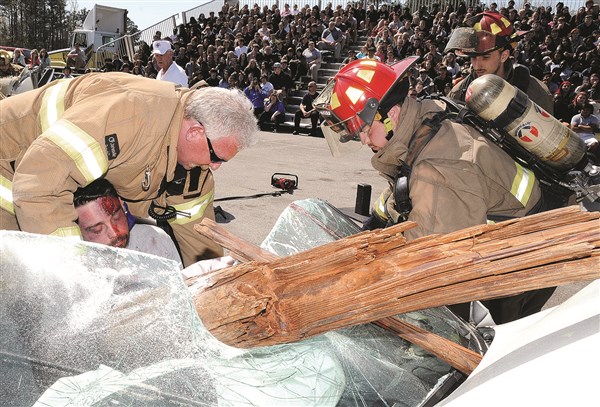 Students at South Columbus High School took part in the VIP 4 VIP (Vehicle Injury Prevention for the Very Important Person) on Wednesday.
Just in time for prom season, this dramatic recreation of an auto crash scene involving a teen, drinking and driving, involved area law enforcement, fire and EMS crews and was coordinated by a Greensboro based organization that has visited the school, and Columbus County, several times in recent years.
“Parents” arriving on the scene as crews removed their “son” from the wreckage, and ultimately were not successful in saving his life, were a powerful demonstration of the real cost and consequence of decisions every driver makes.
VIP 4 VIP was presented at West Columbus High on Tuesday. Loris High School on Tuesday, hosted a program using “Drunk Driving Goggles” that simulate the impairing effects of alcohol on the body.
Look for more on both events, and more photos, in the March 30 Tabor-Loris Tribune in print and online.