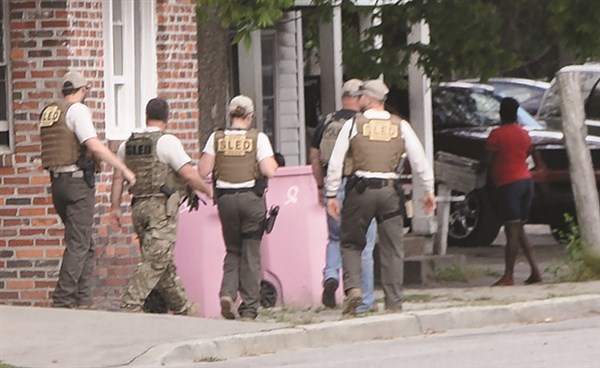 Seven arrests and seizures of guns and drugs followed a coordinated law enforcement raid targeting Maple Street in Loris Thursday, Police Chief Karen Shepherd said Friday.
Blocking both ends of the street, offices from numerous agencies made arrests and executed three search warrants as a helicopter monitored activity from above a growing crowd of spectators.
Loris Police Department officers were joined by South Carolina Law Enforcement Division (SLED), Horry County Police, Horry County Sheriff, and the 15th Circuit Narcotics Taskforce swooping in on the short block with a reputation for drug activity, Shepherd said.
“A huge amount of drugs were seized, from marijuana, heroin and molly, along with a great deal of weapons,” Shepherd said. “We’ve been dealing with all sorts of crime associated with drug activities for a while now and we had to put a stop to this.
“I really appreciate the help we received from the county and state departments. There has been a great deal of work done over the last couple of months to prepare for this.”
Shepherd said she asked for the coordinated effort that also involved federal law enforcement agencies. Drugs seized included a liquid believed to be MDMA, commonly known as ecstasy.
For additional details see Wednesday’s Tabor-Loris Tribune in print and online.