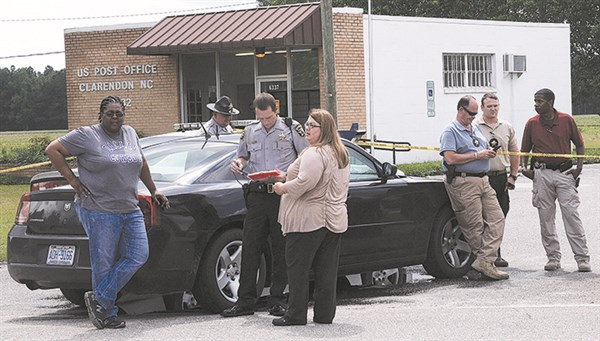 Armed robbery of a U.S. Postal Service office in Clarendon left a clerk shaken, two men getting away with an undisclosed amount of money and a bank check, a Columbus County Sheriff’s Office spokeswoman said Tuesday.
Postmaster Harriett Epps said the clerk, alone in the small rural office, was not seriously injured, but she was struck by one of the two men who entered the post office about 1:40 p.m.,  jumped over the counter, and demanded money.
At least one of the men had a gun, sheriff’s spokeswoman Michelle Tatum said. Both men apparently fled on foot, she said.
U.S. Postal Inspectors are also involved in the investigation, arriving about mid-afternoon. Armed robbery of a postal employee is punishable by up to 25 years in prison, U.S. Postal Inspection Service officials have said previously.
Look for more on this story, as details become available, in Tabor-Loris Tribune in print and online.