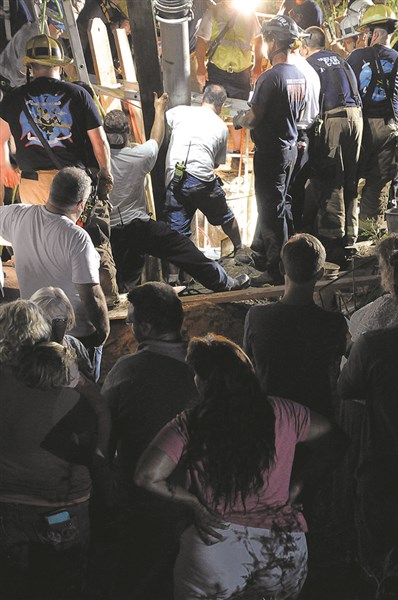 Fire rescue personnel near the end of their effort to rescue Jarad Johnson from a hole south of Loris Monday night.

A lengthy trench operation that ended with the successful rescue of a Loris area teen might have had a much different outcome if not a “mutt” of a dog, family members said.
Jarad Johnson, 17, was pulled from a deep hole on family property off of Red Bluff Road just north of Daisy Elementary School about 10 p.m. Monday, some five hours after he slipped into a pit, Horry County Fire Rescue Deputy Chief Mike Norket said.
Johnson appeared to be doing well as he talked to an AirLink air ambulance crew before being flown to Grand Strand Regional Medical Center in Myrtle Beach.
Johnson’s brother, Chris Cooper, and Cooper’s girlfriend Kaila Hill, described the first stages of the rescue moments after the helicopter took off.
“We were in the house and the dog just went crazy,” Cooper said.
Tuxx, their bull dog, lab, and who-knows-what else mix, was on a mission, the couple said.
“He was going round and round, barking, wanting to get out,” Hill said.
“When we went outside, then I could hear my little brother calling for help,” Cooper said.
Johnson had been digging a trench, and apparently stepped off the equipment he was using and slipped into the deep hole, Cooper said.
Special rescue teams from the North Myrtle Beach and Myrtle Beach fire departments joined in the rescue operation, which also used a large truck mounted vacuum to suck mud and water from the hole, aiding in the effort to free Johnson.
Family members and friends kept a close eye on the rescue operation, were given periodic updates on Johnson’s condition, who was talking with his rescuers throughout the evening.
Pulled from the hole and carried on a backboard by firefighters, Johnson was soon trailed by family members, some who stopped to offer thanks to fire rescue personnel they encounters.
Norket described the operation as “very successful, I’m very happy with the outcome.”
Look for more on this story, and more photos in Wednesday’s Tabor-Loris Tribune in print and online.