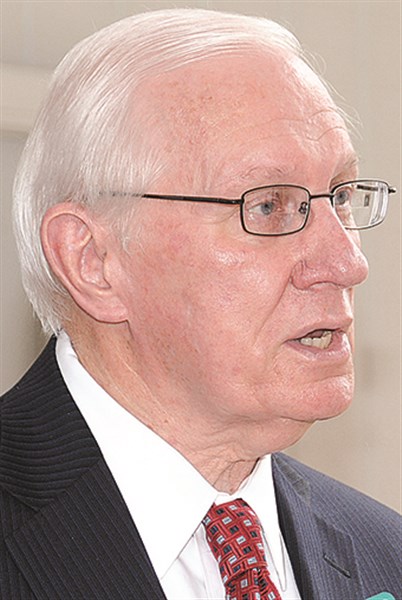 Former state Sen. R.C. Soles Jr. of Tabor City is accused of assault and battery in a misdemeanor summons obtained early Saturday by a law client.
Michael Cole Scott, 33, of Greenfield Estates, Whiteville, obtained the summons on his second attempt to obtain a warrant for Soles, Tabor City Police Chief Donald Dowless said. Scott alleged that Soles attacked him Wednesday, during an argument in Soles’ Tabor City law office.
Capt. Greg Sibbett conducted that investigation, provided a copy of his report to Scott, who then was able to obtain summons.
Scott, the summons said, was punched in the mouth by Soles, “causing a small laceration to his upper lip.” Scott also alleged that Soles grabbed him “around the neck with his left hand,” the summons said.
Police were unable to immediately locate Soles Saturday morning, Sibbett said. A summons does not involve an arrest. When served, Soles will have to sign for the document, and agree to appear in Tabor City District Court on Oct. 14, Sibbett said.

Investigation
Scott told police he was in Soles’ office Wednesday afternoon asking about progress on a civil case Soles’ was handling, and asking for money to allow him to make a house payment, Sibbett’s report said.
“Scott stated that at this time Soles became enraged and assaulted Scott by striking Scott across his lower back with a large engraven stick,” the report said. “Scott also stated that Soles also grabbed him by the throat and punched him the mouth with Soles’ right hand.”
Look for more on this story in the next Tabor-Loris Tribune in print and online.