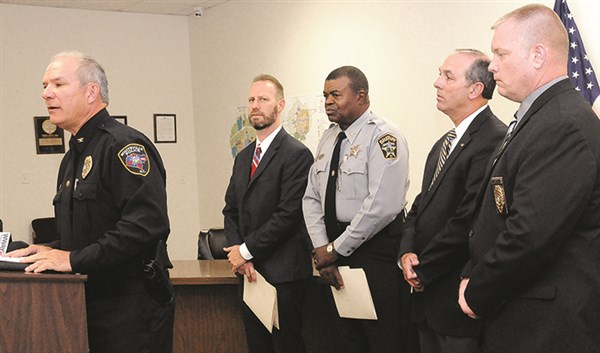 UPDATE: Wednesday afternoon
As hundreds of students stayed away from class in Columbus County Wednesday, two teens were served with felony charges, accused of posting a notice on social media involving “clowns” and a “purge” on campus, Sheriff Lewis Hatcher said.
Each of the accuses is 15 and male, and were served with juvenile petitions charging them with making a false report concerning mass violence on educational property,” District Attorney Jon David said.
Because the teens are juveniles, their names will not be made public, David said. Both David and the sheriff would not say if the teens were students in the Columbus County or Whiteville City school systems.
More than 1,340 of the Columbus County Schools’ 6,212 students were not in class Wednesday, spokesman Kelly Jones said. On Monday 527 students were absent.
At the Whiteville City Schools 652 of 2,307 students were not in class Wednesday, spokeswoman Rhonda Dutton said. That’s an attendance rate of 72 percent, sharply below the typical 94 to 96 percent attendance rate for the district.
Some students and parents were clearly frightened by the widely-shared social media posts, Hatcher said.
“We don’t take this as a joke,” Hatcher said. “I take it seriously.”
A “team approach” to the investigation, with close coordination between sheriff’s and Whiteville detectives and the SBI, made the quick charges possible, David said.
Detectives worked through the night Monday, aided by SBI agents who brought “cutting edge technology” to the hunt for an Internet IP address, associated with the Instagram post containing the clown threats.
“Once we had an IP address, we determined a physical location, we began to interview people in and around those residences and were able to drill down to get down to not one but two different suspects,” David said.

Ongoing investigation
Teens charged Wednesday are accused in a social media post monitored Monday, later taken down, David said. A post Tuesday that specifically threatened violence at Whiteville’s Central Middle School remains under investigation.
David said the teens now charged were apparently perpetrating a hoax, one law enforcement took seriously.
“We have to treat these threats as being serious, until we have better information than that,” David said. “And so there are real world consequences for these children, now, too, no matter what their intentions were, they are now charged with felony offenses and brought into the system.”
Counting on the anonymity of the Internet won’t work for others making similar social media threats, David said.
“If you’re engaged in this behavior, we are going to bring cutting edge resources to bear in an attempt to find you, and you will be brought to justice, because it’s very clear to me that the community has seen what has occurred on social media, and they are reacting to these threats as real, and it’s disrupting the educational system.”
Sherriff Hatcher and Whiteville Police Jeffrey Rosier said their agencies will maintain an increased presence on school campuses for the time being.
Look for updates here, as warranted, and a recap in the next Tabor-Loris Tribune in print and online.

UPDATE: Tuesday afternoon
“Persons of interest have been identified” and a social media account has been seized by investigators looking into online posts involving “clowns” and “purging,” a Columbus County Sheriff’s Office news release said late Tuesday afternoon.
No suspects are in custody, though Whiteville Police Department detectives interviewed one juvenile believed connected to the social media posts Tuesday morning, spokesman Hal Lowder said.
Sheriff’s and city detectives launched a joint investigation into the social media posts Monday after being made aware of an Instagram post that appeared to be from clownsofwhiteville named five schools that “we are purging on the 14th!”
That post has since been taken down.
Detectives reviewed evidence Monday, and asked the Computer Crimes Unit of the State Bureau of Investigation to assist, sheriff’s spokeswoman Michelle Tatum said in a news release.
“Investigators worked tirelessly throughout the night following leads and going door to door, interviewing parents,” Tatum said.
County and city schools will be monitored “for any suspicious activity,” Tatum said, adding that Sheriff Lewis Hatcher and Whiteville Police Chief Jeffrey Rosier had ordered increased patrols at all county and city schools.
With the investigation ongoing, investigators ask that anyone with information that might be helpful contact the Criminal Detective Division at the Columbus County Sheriff’s Office.
Those with concerns about a specific school, should contact either the Columbus County or Whiteville City Schools.

UPDATE: Tuesday morning
A juvenile being interviewed by Whiteville Police Department detectives Monday morning is believed connected to social media posts indicating clowns were threatening a “purge” in several public schools across Columbus County this week, city spokesman Hal Lowder said.
Interviews with additional juvenile suspects are likely, though no charges had been filed after 9:15 a.m. Monday, Lowder said.
Lowder said city detectives have been working with the Columbus County Sheriff’s Office on the investigation, with both Columbus County and Whiteville City schools named in the social media posts.
School leaders said Monday they are cooperating with investigators, and working with law enforcement to ensure campus safety.
Check back here for updates, and see the story in Wednesday’s Tabor-Loris Tribune in print and online.

Monday afternoon
Social media posts threatening a clown purge in several public schools across Columbus County this week are actively under investigation by the Columbus County Sheriff’s Office, the agency announced Monday.
Columbus County Schools and the sheriff’s office was made aware of the social media posts directed to citizens of the county early Monday.
At least one widely shared Instagram post that appeared to be from clownsofwhiteville named five schools that “we are purging on the 14th! the post said. “For all people who think we are joking will find out.”
“Our top priority is the safety of all Columbus County citizens,” a sheriff’s office news release said. “We assure you that Columbus County Sheriff’s Office School Resource Officers will remain vigilant and will continue to closely monitor all activity at area schools.”
“The safety of our students is top priority,” Columbus County Schools posted on its Facebook page. “Our school system will continue to carefully monitor each student, and will be diligent about all activity occurring on or near the school grounds.”
Additional law enforcement officers will be on school campuses as need, the school system said.
“Our close partnership with local law enforcement enables us to provide a safe environment for all of our students and staff,” the school system said. “We will continue to closely monitor the situation and take necessary actions as recommended.”
Those with concerns over their child’s school should contact the Columbus County Schools, the news release said.
“If you have information that you feel will assist with this investigation, please contact Columbus County Sheriff’s Office – Criminal Detective Division,” the release said.
For more on this story see the next Tabor-Loris Tribune in print and online.