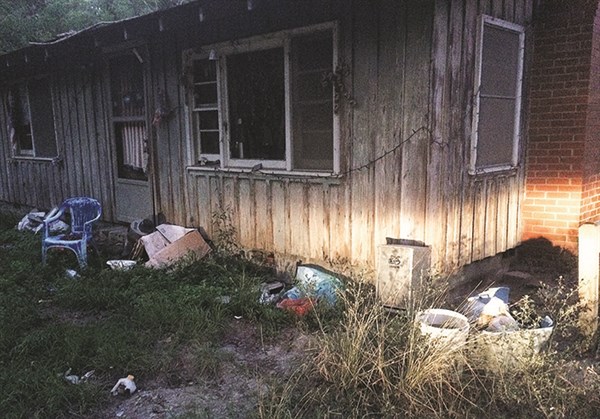 UPDATE
Animal cruelty and abandonment warrants have been obtained for a woman accused of leaving cats and dogs without food and water, resulting in the death of one dog, Columbus County Animal Control Director Joey Prince said Wednesday.
Thelma Rebecca Creech, 36, of Reaves Ferry Road, Nakina, is charged in the warrants with five counts each of animal cruelty, animal abandonment, and failing to vaccinate animals for rabies, Prince said.
Warrants were delivered to the Columbus County Sheriff’s Office to be served, Prince said.
Animal Control officers responding to a 9-1-1 call last Friday found one dead dog, at least four others that appeared malnourished, and at least two cats in the same condition, Prince said.
Creech is a daughter of the two previous residents of the Sikes Road house, Prince said. Her father died in 2014, her mother in 2015. Prince said the animals had been “pretty much on their own” for about two years, Creech occasionally, but not regularly, bringing food by.
Empty bags of animal food were found strewn across the property, with dog houses, fenced in cages for dogs, and feeding bowls.
Traps have been set for the remaining animals, two dogs caught during the weekend. An animal abandonment specialist from Brunswick County said the two dogs taken so far appear salvageble.
“As for the other animals, I’ll have to let him determine that, he has the expertise,” Prince said.

Original post
One dog was found dead, three more alive but malnourished, with two starving cats were found at an abandoned Sikes Road home Friday evening, Columbus County Animal Control Director Joey Prince said.
A 9-1-1 call prompted the Animal Control investigation at the empty house at 182 Sikes Road, just off of Whitehall Road north of Whiteville, Prince said in a news release.
“The animals that remained alive are very wary of people,” Prince said.
“Humane traps” have been left on the property in an effort to capture the animals and get proper care for them at the Animal Control Shelter, Prince said. Food and clean water was left for them.
Officers believe the deceased dog had been dead for less than a day, and that the animals had been left weeks ago, Prince said. Conditions of the house and yard led to that conclusion.
Empty bags of animal food were found strewn across the property, with dog houses, fenced in cages for dogs, and feeding bowls.
No food nor clean water was found on the property Friday evening.
Charges of animal cruelty, animal abandonment and failure to obtain the vaccination for the animals are likely, Prince said.
Anyone with information on these animals and their owners is asked to contact Animal Control at 910-641-3945.
For more on this story see next Wednesday’s Tabor-Loris Tribune in print and online.