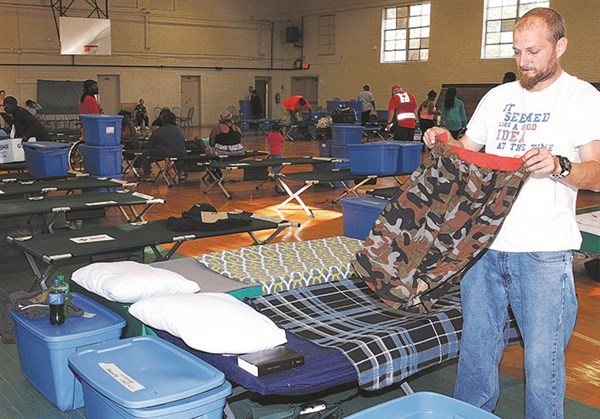 Brian Borders, above, folds clothes after making his cot after moving from the American Red Cross Shelter at West Columbus High School to the Columbus Career and College Academy gym in Fair Bluff Sunday morning. Below, Janis Dossie reacts as her grandmother, Rachel Dossie, wipes the eye of cousin Jazhe Pittman inside the shelter, where Marianne Theophilis, an American Red Cross volunteer from New York, stocks shelves. (Deuce Niven photos) 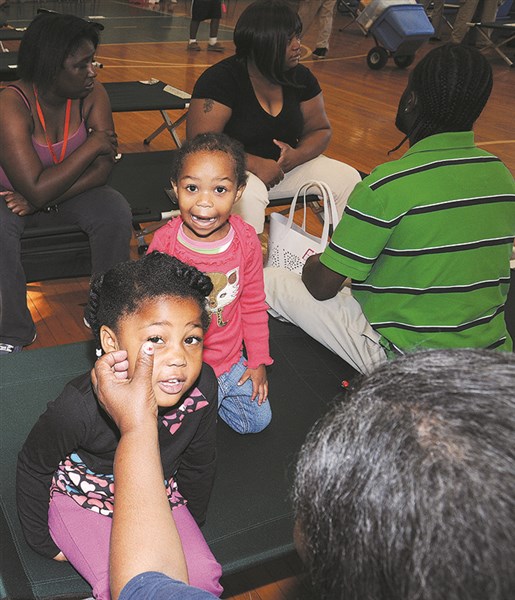 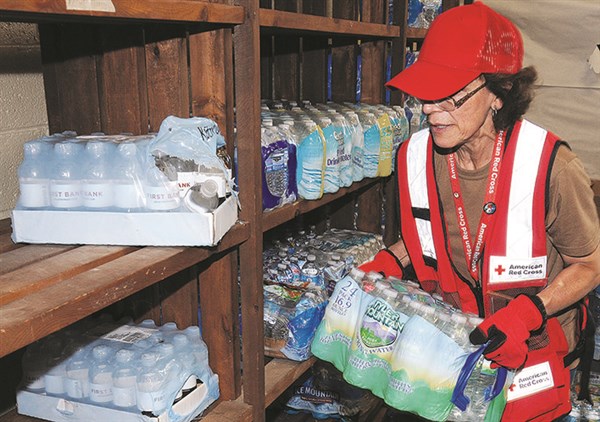 Some 90 men, women and children, already displaced by Hurricane Matthew, were relocated six miles west Sunday from West Columbus High School in Cerro Gordo to the gym at the Columbus Career & College Academy (CCCA) in Fair Bluff.
That move sets the stage for classes to resume Tuesday throughout the Columbus County School system. Whiteville City Schools will open on a two-hour delay Monday, while Southeastern Community College will resume regular schedules at 8 a.m. Monday.
Out-of-county fire and EMS units that have backed up Fair Bluff Fire/Rescue during the past week left Sunday morning, with neighboring Columbus County departments moving in, for now, rotating shifts covering the volunteer department, Chief Travis Causey said.
“We’re just so grateful for all of the help,” Causey said.
Flood waters remain high at the Fair Bluff fire station, and though receding in some areas of town more quickly than projected, it was not clear Sunday when the town might dry out.
Also still flooded was the downtown business district, including Town Hall and the police department.
A half-dozen North Carolina Highway Patrol Troopers were in town Sunday, backing up the small police department, as donations of food, water and other supplies continued pouring in to a distribution point set up inside S&L Funeral Home, residents stopping by to pick up what they need.
“I like helping people,” Stephens said. “I’ve been here every day.”
At the shelter, Brian Borders said he was grateful for the Red Cross and others as the storm and other circumstances left him homeless.
“We just got here eight days before the Hurricane,” said Borders, 29. “Me and my wife, we’re from Goldsboro.”
Family members had offered the couple a place to stay and try to get off their feet.
“Then the hurricane came, their house is under water. They’ve gone to Wilmington, and we’ve got nowhere to go.”
County and volunteer agency leaders had hoped the Edgewood shelter would be closed during the weekend. That did not happen.
“We’ve still got 23 at that shelter,” Clark said. “That tells me they don’t have anyplace to go.”
Look for more on this story, and a wrap-up of the latest in recovery efforts following Hurricane Matthew, in Wednesday’s Tabor-Loris Tribune in print and online.