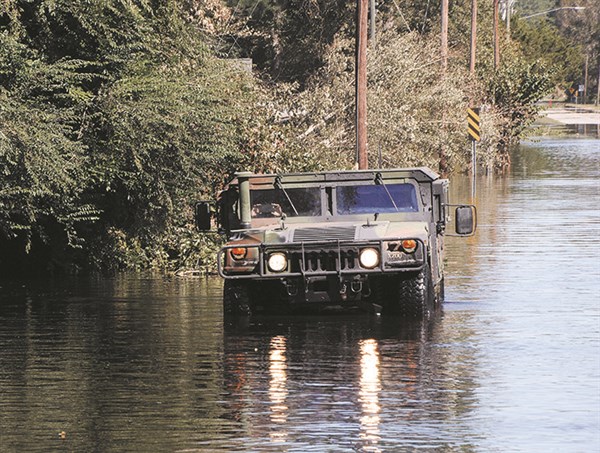 Public access to the town of Fair Buff has been eliminated, with checkpoints established for all roads leading into the town, a news release from Columbus County government said.
“Only emergency responders and local residents will be allowed past checkpoints,” the news release said. “Local residents need to be prepared to show identification to be allowed access.”
Donations of relief supplies will not be allowed into the town, and will be re-directed to a donation collection center being established at the old Tortimex building at 56 Industrial Boulevard North, just off Chadbourn Hwy west of Whiteville.
That center was set to open at 2 p.m. today.
Suggested items for donations are cleaning supplies, non-perishable foods, bottled water, diapers, and toiletries.
Clothing donations and monetary donations will not be accepted at this facility or by Columbus County Emergency Services. County officials suggested making those donations to a church or charity of the giver’s choice.
Citizens in Fair Bluff in need of relief supplies should visit the newly opened distribution center at the old Umbro plant, 11917 Andrew Jackson Hwy West, in Fair Bluff. Operating hours are 8 a.m. to 5 p.m. Monday through Saturday.