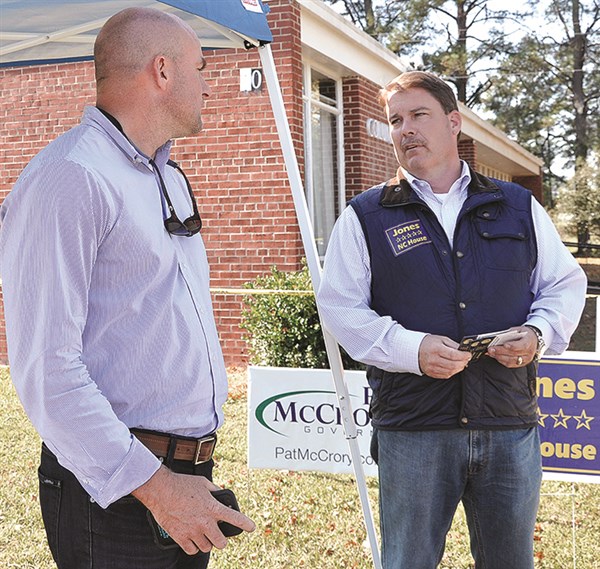 Brenden Jones, right in top photo, outside the Columbus County Board of Elections during early voting Monday, with state Senate candidate Danny Britt by his side. Tim Benton, below, spoke with reports Thursday. (Joyce Graham photos) 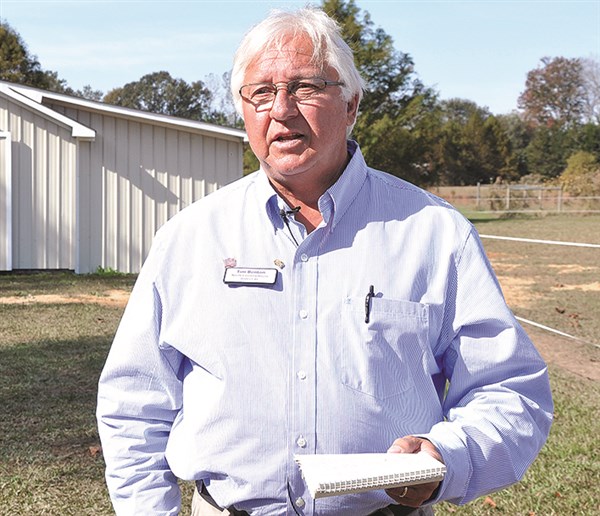 Five days after an altercation involving state House of Representatives candidate Brenden Jones of Tabor City, Democratic opponent Tim Benton offered his first in-person account of Saturday’s incident during Bladenboro’s Beast Fest.
Jones obtained a criminal summons charging Benton with assault Saturday. Benton, who said he initially had no plans to seek formal charges, later followed suit and provided a copy of the summons against Jones after calling reporters to his Bladenboro area farm Thursday morning.
Benton offered little more information than his prepared statement released earlier this week. He said his attorney advised him not to comment on questions of whether he struck, or was struck, in the altercation with Jones, adamantly maintained his innocence.
“I am absolutely not guilty as charged,” Benton said.
Jones, early this week, said Benton approached him at the Bladenboro festival, cursing and upset over campaign literature that tied Benton to leading Democrats including Presidential hopeful Hillary Clinton.
Jones said he asked Benton to cross the street with him, separating the men from families, that Benton kept “nudging my shoulder with his, like pushing me” before stepping up behind the GOP candidate, delivering a “sucker punch.”
Benton’s story Thursday was similar, with roles reversed, alleging that Jones’ shoulder invaded his space.
“I had approached my opponent and made a comment about the dirty campaign that he was running, and he said that he had not run a dirty campaign,” Benton said. “Mr. Jones invited me across the street for a discussion, and I hesitated because of my grandchild.
Mr. Jones told his wife to watch the baby, and she did, and I went with him.  After moving a short distance away, Mr. Jones turned and leaned into my face, brushing me with his shoulder and said ‘I’m going to break it off…” ending the sentence with a curse word.
Benton expanded his comment after talking with his daughter.
“He leaned into me, whole body and shoulder, and at that time, I used my hand to remove him from my space and to defend myself,” Benton said.
Benton said he delayed talking with reporters, and directly addressing the incident because he wanted to make sure his story was correct and consistent.
More on this story can be found in the next Tabor-Loris Tribune in print and online.