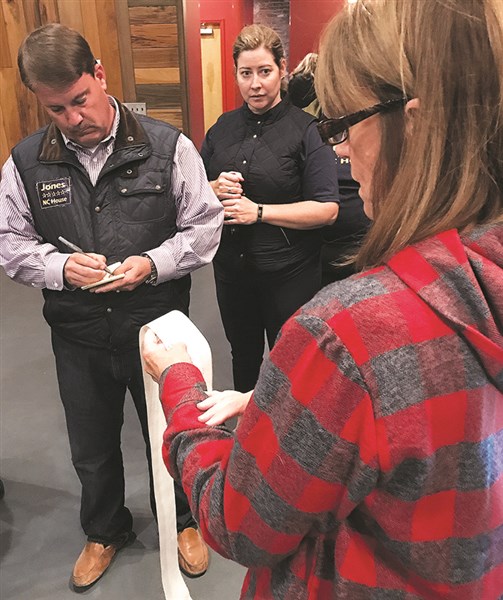 Brenden Jones became the first Republican from Columbus County elected to the North Carolina legislature in modern times, perhaps since reconstruction following the Civil War, early unofficial returns from Tuesday’s general election showed.
Organization and a widespread desire for change fueled Jones to 60 percent of the vote with 37 of 40 precincts reporting in about 10 p.m. Tuesday, 24 of 26 precincts in Columbus County.
“I think it shows that people in the district are ready for change,” Jones said as about 50 supporters gathered at Cub’s Subs restaurant in Tabor City to watch returns from races up and down the ballot.
Jones said that support has been widespread, crossing economic, social, racial, and political lines in a district that until recent years was seen as reliably Democratic.
Jones’ vote totaled 18,298 with all but three precincts reporting Tuesday night, Democrat Tim Benton trailed with 11,210, Libertarian Thomas Howell Jr. had 966 votes.
In Columbus County Jones had 13,343 votes with just two precincts outstanding, Benton 8,071, Howell 525.