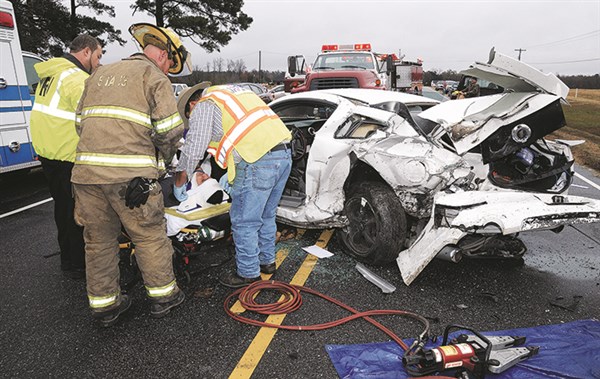 A Chadbourn woman carrying her grandchildren to school was killed when her pickup truck slammed into a car that had lost control and spun on U.S. 701 in the Williams Township area Monday morning, Trooper Bret Baxley of the North Carolina Highway Patrol said.
Deborah Nobles Walters, 57, died in the 8 a.m. crash just south of F.M. Watts Road, Baxley said.
Her grandchildren, her 14-year-old grandson was injured and taken to a hospital, the other grandson, age 9, was uninjured, Baxley said.
Alfonso Pantaleon, 18, of Whiteville, and his sister, 17, received non-life threatening injuries in the crash, Baxley said.
Pantaleon was travelling south in his 2006 Ford Mustang when he attempted to pass vehicle that was not involved in the crash, Baxley said. Pantaleon lost control of his car after he saw Walter’s northbound pick-up truck and tried to pull quickly back into his lane. The car spun, its rear colliding with the front of the truck.
Baxley said neither alcohol nor drugs appeared involved in the crash, and excessive speed appeared unlikely. His investigation will include downloading information from data recorders on both vehicles, likely later this week.
Ambulances from Tabor City, Nakina and Whiteville worked with Williams Township Fire Department on the 8 a.m. crash.
See the full story in this week’s Tabor-Loris Tribune in print and online.