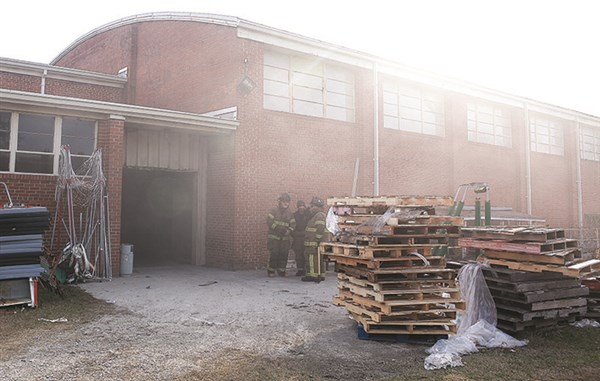 An accidental fire caused no structural damage to the gym at the former Mt. Olive School near Whiteville Friday morning, but the extent of the loss of contents may not be know for days, Columbus County Schools spokesman Kelly Jones said.
“There was a lot of smoke damage,” Columbus County Fire Marshal Shannon Blackman said. “Water damage, too.”
Built in 1952 at what was then an all-black school, the Mt. Olive Annex has been used by the system’s Plant Operations department for storage, Jones said.
“It’s a holding place for new items, items that are being discarded,” Jones said. “There’s a fair amount of equipment, heating and air conditioning, technology items.
“If we lost everything in that building, it would be significant.”
Mt. Olive Head Start, next door, was evacuated during the fire. Blackman said some of its students were not inside yet when the alarm sounded about 8:45 a.m., and waiting with parents until the all-clear was sounded.
School employees had been burning leave and limbs outside the gym, and had moved some cardboard boxes inside, Blackman said. It appears one of those boxes may have had an ember on, or in it, leading to the fire.
Heavy smoke was pouring from the structure when the first firefighters arrived, Blackman said, prompting a heavy response that would involve the North Whiteville, Evergreen, Chadbourn/Klondyke, Cerro Gordo, and Fair Bluff, fire departments, ladder trucks from Whiteville and Bladen County.
“It turned out there was no need for the ladders,” Blackman said.
With the fire out inside of an hour, heavy smoke lingered inside, preventing a quick evaluation of the loss, Jones said.
“It may be after Christmas before we really know,” Jones said.