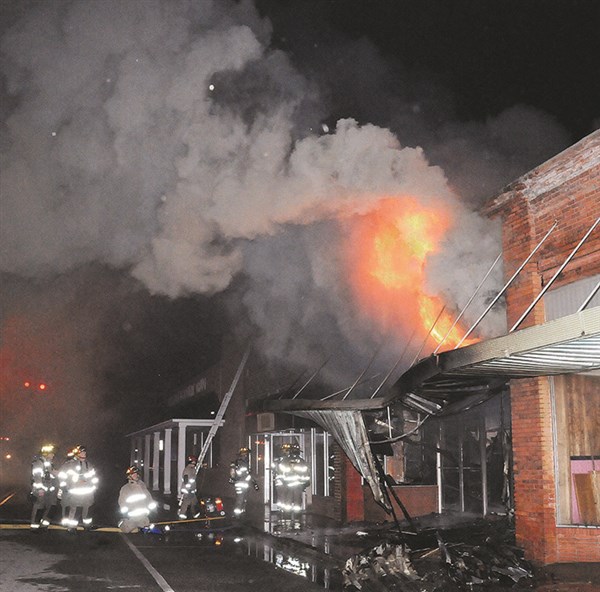 “Fire was coming from everywhere” inside a West 5th Street building in the heart of Tabor City’s downtown business district as the first fire crews arrived about 3:30 a.m. Saturday, Fire Chief Jerry Hodges said.
By the time the fire was contained, about 90-minutes later, firefighters from five departments had kept the blaze inside the former Stephens Outreach Center, sparing adjacent businesses from structural damage.
Heavy smoke was visible inside 5th & Mane, a hair salon next door to the east, while there did not appear to be smoke inside the structure to the west.
A ladder truck from Loris Fire Department brought the firefight above the building, a heavy spray pouring into the structure as fire breached the roof, and as it collapsed.
Firefighters were ordered not to enter the building out of safety concerns.
Some departments were released after 6 a.m., as Columbus County Fire Marshal Shannon Blackman arrived, an early step in what Hodges said would be a lengthy investigation likely to involve the State Bureau of Investigation and federal Alcohol, Tobacco and Firearms agents, typical for large-scale commercial structure fires.
Firefighters and trucks from Roseland, Chadbourn and Fair Bluff also responded, with ambulances from Tabor City Emergency Services joined by Chadbourn and Fair Bluff units. Columbus County’s Air Truck, housed at North Whiteville Fire Department, joining the Tabor City Police Department on the scene.
Look for more on this story in the next Tabor-Loris Tribune in print and online.