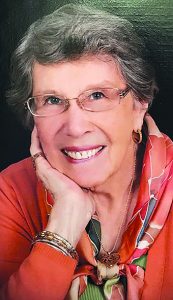 Born April 23, 1924 in Dahanu, India, she was a daughter of missionaries Baxter M. and Anna B. Mow. She returned to the United States at age 17, and married (John) Ernest Snavely on June 23, 1945 in Chicago, Illinois.

Mrs. Snavely attended Woodstock School in the Himalaya Mountains in India, received her BA from the American University of Beirut (Lebanon) in 1954, her MAT in 1974 from the University of South Carolina (USC) Columbia, and her Art Certification from USC, Coastal Carolina in 1975.

Her unique teaching style endeared her to students worldwide. Her teaching excellence is reflected in her Teacher of the Year Awards, including Loris High School in 1980 and in 1982, Horry County in 1982, and the state-wide Secondary Teacher of the Year for South Carolina Art Education Association (SCAEA) in 1981.

She loved to travel, learn, absorb, and share her knowledge. Her interests included music, the arts, history, archaeology, quilting, textiles, and marbling. She sang in her church choir and played piano throughout her life, and sang in the chorus of several operas in Chicago and Monterrey, Mexico. She traveled around the world and lived for extended periods in five countries.

In 1994 she took a group of art educators to China, and took eight other groups to China in the following 16 years.

She was active in, and often held leadership positions in Church, Music, Literary, Art and Quilting groups as well as County, State and National Art Education groups.

She encouraged her children and grandchildren to follow their dreams and supported and loved them unconditionally. She loved the beautiful things of this world and shared them generously with all who knew her. She will be missed in many ways, especially her vibrant, adventurous, kind spirit, and the sincere joy of her smile.

Lois was preceded in death by her husband, Ernie, and two brothers, Joseph and Merrill.

A memorial service was planned for 2 p.m. on Saturday, May 19, at Loris First United Methodist Church in Loris. Burial was planned for a later date in Orange Township Cemetery, Waterloo, Iowa.