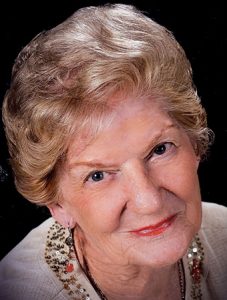 Minette Graham Lovett of Green Sea passed away peacefully on Sept. 4, surrounded by her children and grandchildren. She was 87.

She was born May 7, 1931 and raised in Green Sea, the second of four daughters to the late Leona Lupo Graham and Walter Brantley Graham.

She graduated from Green Sea High School in 1949 and Winthrop College in 1953 with a degree in Sociology and a minor in Psychology. She received a Masters Degree from East Carolina University in 1969 in Guidance and Counseling. She earned her Educational Specialist Degree through USC and the SC Department of Education in 1989.

She entered the work force and was a caseworker at the Department of Social Services in Whiteville for ten years. She then taught Social Studies at Green Sea High for three years before becoming the Guidance Counselor there, a job she held for 24 years before retiring in 1991.

After retirement, she worked part-time in Adult Education and in Admissions at Horry Georgetown Technical College for five years.

She was married to the late Wilson Lovett of Tabor City who passed away in 1988. He was formerly the agriculture teacher and principal at Green Sea High before becoming the Director of the Finklea Career Center, the first career center to open in Horry County.

Mrs. Lovett is survived by three children, LaJuana Lovett of Cherry Grove Beach, Renee L. Long and husband, Steve of Pireway, and Kevin Lovett and wife Darlene of Green Sea; three grandchildren who were the love of her life, Riley Wilson Lovett, Blakely Margaret Lovett and Banks Grayson Lovett, all of Green Sea. They affectionately called her “Mimi.” She attended every school, athletic, and extra-curricular activity they took part in.

She is also survived by two sisters, Willie Jo Dowdey of Columbia, and Peggy Miller of Tabor City; many nieces, nephews, cousins, and a very dear and faithful friend, Irene Harrelson of Green Sea. They have been friends since grade school and Mrs. Irene never failed to call or visit weekly.

She was predeceased by her older sister, Colene Barnhill of Tabor City.

With the help of her dear friend, Irene Harrelson, they helped to acquire the land in front of the Green Sea Baptist Church from the late Frances Derham Brown and husband Wilbur Brown. It is now known as Green Sea Memorial Gardens.

She has overseen the care of the Green Sea Cemetery for more than 30 years.

She co-wrote a book called The Green Sea School and Community. She helped to organize trips for seniors at Green Sea Baptist Church. She did babysitting in the past for her three precious grandchildren, a job she thoroughly enjoyed.

She helped to obtain a $7,000 grant used to set up an archives room at Green Sea Baptist to preserve its past and present history.

With the assistance of a dear friend, Glenda C. Stephens, she helped to acquire the Green Sea Baptist Historical Marker as a memorial to their parents, Mr. and Mrs. Walter Graham and Mr. and Mrs. John Clemons, Jr.

Lastly, Mrs. Lovett was named one of the Horry Telephone Cooperative Hometown Heroes in 2008 for work she had done for her community.

Visitation was planned from 11:30 a.m. until 12:45 p.m., preceding the service, in the Green Sea Baptist Church Fellowship Hall.