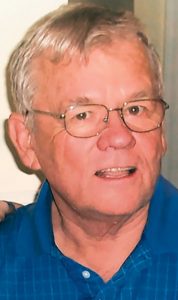 Roy Carmel Milligan, of Greenville, South Carolina, passed away at the age of 81 on Sept. 27, after a courageous 12-year battle with cancer.        Roy, the second son of John Roland Milligan and Connie Maxwell Cox Milligan, was born on a farm in Tabor City on July 2, 1937.

He was raised with three brothers, John Leckman, George Truett and Norman Barry. He graduated from Tabor City High School in 1955 and joined the Army.

He met the love of his life, Peggy Jolly Milligan in elementary school, when he used to pull her hair while sitting behind her in their class.  Peggy’s family moved away but the two of them reunited in 1956. They began writing letters to each other and Peggy came to visit him while he was stationed in Augusta, Georgia during Easter weekend. On Oct. 12, 1957 they were married, and began a cherished bond that would prove to be a loving example of marriage lasting generations.

Roy was such a loving and caring man who worked tirelessly to provide for his family. After his time with the Army, he moved to Charleston with his wife Peggy and began working with SCE&G as a gas specialist, retiring after 20 years of service. He then opened RCM Construction Company in 1978 and built many homes in the Crowfield area and throughout Summerville. He also created a company with his best friend and brother Barry, called BR’s Clearing and Grading that Barry still owns today.