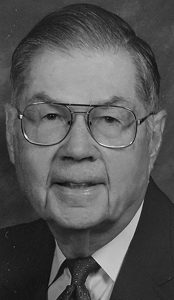 Ernest Stedman Cox of Denver passed away peacefully on Oct. 1, following a stroke.

Ernie, as he was known to friends and family, was born on Aug. 1, 1929, to Grover Stedman and Anne Carmichael Cox in Wilmington.  He lived a full and happy life, and deeply loved his wife and family, his career and friends in the trucking industry, and active volunteer service in the communities where he lived, especially Denver on Lake Norman.

Ernie grew up in Tabor City with his parents and brother, James Allen Cox, and earned a B.S. in Chemistry from the University of North Carolina at Chapel Hill. He went on to graduate school in transportation management at the University of Tennessee, where he also met his future wife and the love of his life, Georgianna Seal Cox. He and Georgianna recently celebrated 65 years of marriage on September 5, 2018. Traveling extensively across the U.S. and abroad and enjoying their beautiful lake home in Denver kept them young and happy together.

Ernie and Georgianna have three children: Dianne Cox Boyd, Louise Cox Dixon, and Jim Stedman Cox. He was thrilled to see his family grow to include two sons-in-law, Randy Boyd and Stern Dixon, a daughter-in-law Payge Pinson Cox, and six grandchildren: Hannah Dixon, Sid Dixon IV, Courtney Boyd, Casey Cox Daniels, Ali Cox and Wade Cox. He was a beloved “Papaw” and enjoyed boating, fishing and many other adventures with all his grandkids and family.

Ernie’s other great love was his life-long career in the trucking industry, from which he retired at age 80. He earned one of the industry’s greatest honors when elected to serve as Chairman of the American Trucking Associations in 1983-84. He began his career at Caterpillar in Springfield, Ill., and was President of Moss Trucking Co., until August 1994. He also received The Order of the Long Leaf Pine award from North Carolina’s governor for his work in advancing the transportation industry and his exemplary service to the state of North Carolina.

Always an avid volunteer and big believer in giving back to his communities, Ernie tackled a number of community improvement endeavors in and around Denver over the years. A loyal Rotarian, Ernie was a Paul Harris Fellow and earned his 40-year Perfect Attendance Award from Rotary International. He was an active member of the Denver Lake Norman Rotary Club and served on the board of the East Lincoln Rescue Squad for many years. He especially enjoyed helping connect these two volunteer organizations and having a hand in creating the East Lincoln Rescue Park, a community recreation center and home to Denver Days.

A memorial service was planned for 2 p.m. Saturday, Oct. 6 at Salem United Methodist Church in Denver. Family planned to receive friends immediately after the service in the church fellowship hall.

To those who wish to make a memorial gift, contributions can be made to Rotary Club of Denver Lake Norman Foundation and Florence S. Shanklin Branch Library in Denver, North Carolina.