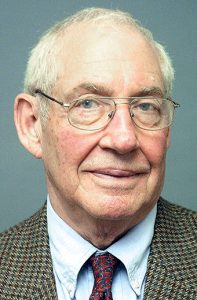 James Charles “Jim” High, long-time publisher of The News Reporter in Whiteville, died Wednesday, Jan. 2 at Carolinas Medical Center in Charlotte after a brief illness. He was 85.

He died peacefully while surrounded by his family over Christmas and New Year’s. He remained mentally sharp and was engaged at The News Reporter, where he worked regular hours and maintained an open door policy, until just four weeks before his death.

The News Reporter became one of the most respected community newspapers in the state under his guidance. He had worked for only a few weeks at the newspaper when his father-in-law and publisher, Leslie S. Thompson, died suddenly, thrusting the 25-year-old into the role of general manager and publisher.

Generous, kind, determined, selfless, humble, wise counselor, and gentle giant are some of the words often used to describe Jim. He was a nice man and never said a harsh word about anyone. He was happiest when he made others happy.

During the course of his life, he very quietly helped a number of young people succeed and was a father figure to many.

It’s unknown how many local kids he helped attend college or how often he provided spending money for those who needed it to get ahead in life.

He was heavily involved in the Columbus County Committee of 100 and Greater Whiteville Chamber of Commerce. He and a handful of other business leaders were instrumental in bringing jobs to the county.

He was also a philanthropist, cheerfully giving money to good causes, large and small.

Perhaps above all, Jim High was a devoted family man.

He was blessed to have two blended families that he loved dearly.

He married his high school sweetheart, Carolyn Thompson High, in 1958.

Carolyn, who along with Jim was immersed in local causes, suffered an untimely death after a brief battle with cancer in 1985 at the age of 50. They were married for 27 years.

He later married Sally McKenzie Page, who had lost her husband Pete in a tragic accident.

Together, they travelled extensively and enjoyed symphonic and operatic performances. They were married 32 years.

A memorial service was planned for 2 p.m. Saturday, Jan. 12, at Whiteville United Methodist Church, with a reception to follow in the church fellowship hall.