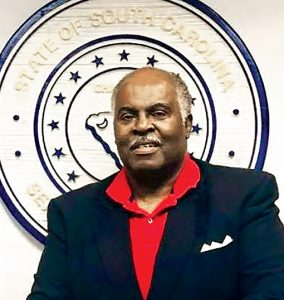 He was born Dec. 5, 1950 and was reared in the Loris Community of Horry County. He was the son of Lewatha and Daisy Mae Nichols and had one sibling, Gloria Nichols-English.

Nichols was devoted to his family. He and wife Veda married in 2007 and together returned to his beloved Loris to care for his mother, Daisy, in the family home.

His father was a farmer and entrepreneur and his mother was an educator and beauty salon owner/operator. He accepted Christ at an early age, and attended his family church, Silent Grove Baptist Church in the Finklea Community.

Nichols was educated at Watson Elementary School and completed his high school education at the Mather School, a private boarding school in Beaufort. Henry graduated as the Salutatorian of his class at the young age of 16. He earned a bachelor’s of science degree in History from Howard University and later earned a Master’s in Business Administration (MBA) from the University of District of Columbia.

Nichols valiantly served his country as an officer in the U.S. Marine Corps, retiring as a Lieutenant Colonel after 20 years of service. In addition to his military career, he had a successful sales career as an Account Executive at Xerox Corporation.

As a business owner he served as CEO of ACE Mortgage Company and Nichols Professional Cleaning Services. Nichols received a gubernatorial appointment as the Chief Financial Officer for the State of Maryland Department of Health and Human Services. He later relocated to Greensboro, where he served as the Assistant Vice Chancellor for Budget, Finance, and Athletics at North Carolina Agricultural and Technical State University.

His desire to serve his beloved community lead him to run for Mayor of Loris in 2016 using the appropriate theme, ”Moving Forward Together.” He made history when he was elected as the first African-American Mayor and worked toward making Loris a better city for all of its citizens.

Despite his many titles and accomplishments, his favorite and proudest title was “Pop Pop” to his four grandchildren; Sydney Marie, Jonas Orion, Joel Owen, and Emily Faith.

He was preceded in death by his parents, Daisy and Lewatha Nichols; daughter Leah GeorgeAnn Nichols; and grandparents Henry (Maggie) Dewitt, and Leonaduss (Armatha) Nichols.