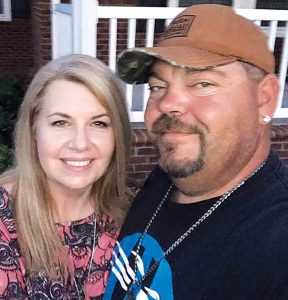 Funeral services for Jolena Joy Long Timmons, a beloved art teacher at South Columbus High School, and her husband Donald Bradley Timmons, will be held in the auditorium at SCHS at 11 a.m. Thursday, June 6.

Visitation for the couple, married on Jan. 20 of this year, will be from 6 to 8 p.m. Wednesday, June 5, at Inman Ward Funeral Home in Tabor City.

Both died in the aftermath of a two-vehicle crash on NC 905 north of Nakina at about 6:30 p.m. Friday. They were passengers in one of the vehicles, the driver and a third passenger were seriously hurt, The News Reporter in Whiteville reported.

A single occupant of the second vehicle, an SUV which overturned in the crash, was also injured.

Brad Timmons, 41, was pronounced dead on the scene of the crash in the 6500 block of NC 905, in a sharp curve near Poley Bridge Church Road.

Brad and Joy were married on Jan. 20 of this year.

“Our prayers and thoughts go out to the family,” Williams said.

Joy Timmons, a graduate of Williams Township School who earned an arts education degree from UNC Charlotte in 1991, had taught as South Columbus for many years, and was beloved both on campus and throughout the school district, Williams said.

Counselors will be on campus Monday to assist students and staff as needed.

“I’ve contacted our student support services director, and she already has a team mobilized to be there Monday morning,” Williams said.

Exams are still underway ahead of Wednesday’s scheduled commencement at South Columbus, Williams said. Mrs. Timmon’s 40 arts students are among those with exams scheduled Monday.

“We have discussed a plan for that,” Williams said of the art exam.

“She taught a lot of children,” Williams said of Mrs. Timmons. “They will be hurt.

“We’re just at a loss, she was very well respected.”

Jones described Joy Timmons as a “happy” leader, loved by her students and respected by her peers across the county.

“She always wondered what was best for her students,” Jones said. “She always tried to find ways to reach individual students. She really anchored our visual arts program.

“She took leadership when talking about visual arts county-wide. She was always willing to go above and beyond.

“She simply left a hole that will not be filled in a lot of people’s lives.”

Williams, who graduated from Williams Township a few years ahead of Joy Timmons, said her impact as a teacher was felt at his home.

“She taught my son, John,” Williams said. “He liked the class so much he took Art II, which was a surprise to us. She was that kind of inspiration to him.”

Both Jones and Williams said the days ahead will be difficult for the school system, from administrators to students.

“We just try to get through it,” Williams said.